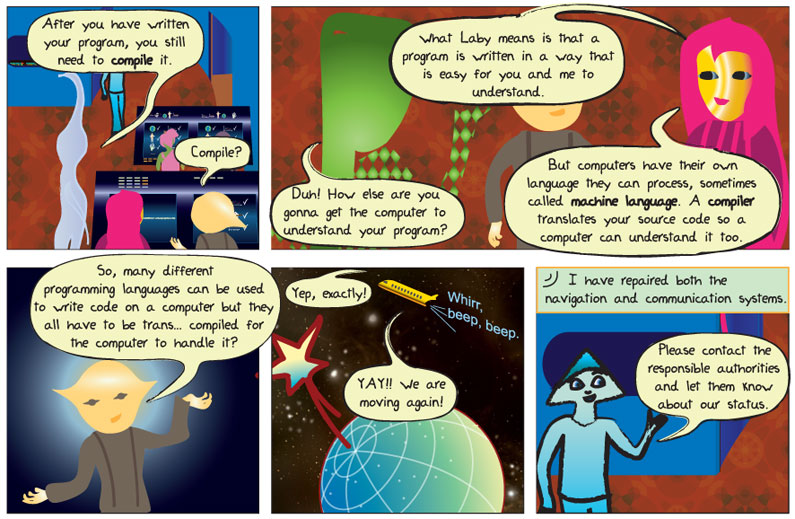 Panel 1.
Balti: After you have written your program, you still need to compile it.
Ludd: Compile?

Panel 2.
Laby: Duh! How else are you gonna get the computer to understand your program?
Kodu: What Laby means is that a program is written in a way that is easy for you and me to understand. But computers have their own language they can process, sometimes called machine language. A compiler translates your source code so a computer can understand it too.

Panel 3.
Ludd: So, many different programming languages can be used to write code on a computer but they all have to be trans… compiled for the computer to handle it?

Panel 5.
Epo: I have repaired both the navigation and communication systems.
Alkina: Please contact the responsible authorities and let them know about our status.

Compile – translate source code written by a computer programmer into code that computer hardware can understand.

Machine code – the code, readable by computer hardware that is created after source code is compiled.

Our current computer technology functions on a binary system, which is to say, the instructions that drive computers are represented by 1s and 0s. For example, to a computer, Hi! translates into 01001000 01101001 00100001. Of course, writing a program in binary or 1s and 0s can be very difficult. It is easy to make a mistake and very hard to locate where the mistake is located.

To overcome this problem, higher level programming languages, like the examples we have been discussing in previous episodes, were developed. Although there are many different types of programming languages that can be used with any computer, all the code written by a programmer has to, in the end, be converted to a series of binary numbers that the computer can understand.

This is a very simplified explanation of what really goes on inside computers, but hopefully it gets the basic idea across.

Binary Computer Code – This webpage uses a lightswitch analogy to explain binary code. It also has an encoder, which will translate what you enter into binary code.