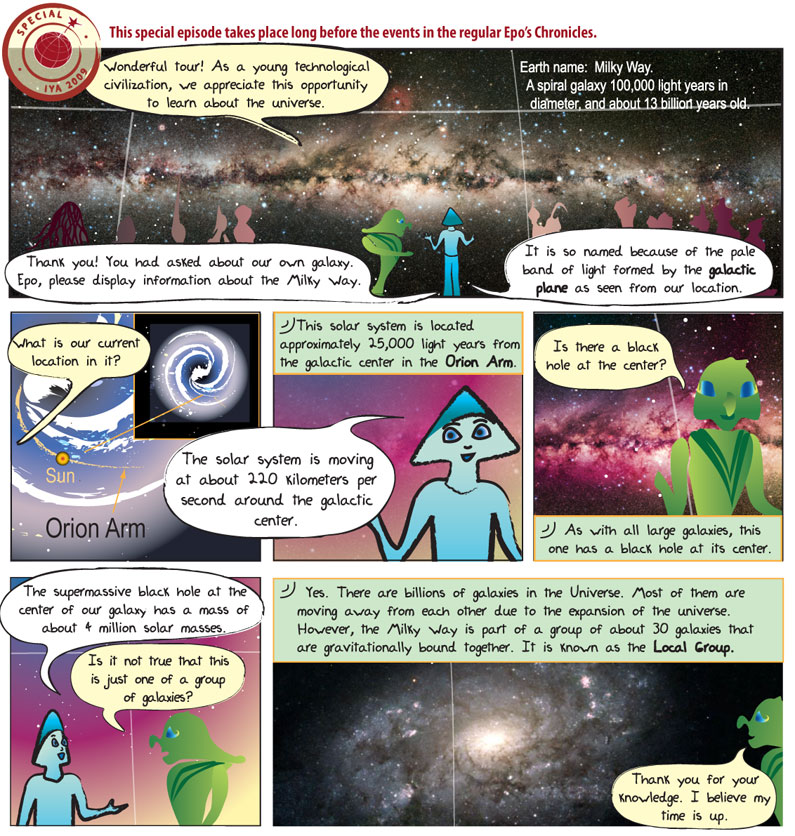 Panel 1.
Ambassador: Wonderful tour! As a young technological civilization, we appreciate this opportunity to learn about the Universe.
Alkina: Thank you! You had asked about our own galaxy. Epo, please display information about the Milky Way. It is so named because of the pale band of light formed by the galactic plane as seen from our location.

Panel 2.
Ambassador: What is our current location in it?

Panel 5.
Alkina: The supermassive black hole at the center of our galaxy has a mass of about 4 million solar masses.
Ambassador: Is it not true that this is just one of a group of galaxies?

Panel 6.
Epo: Yes. There are billions of galaxies in the Universe. Most of them are moving away from each other due to the expansion of the universe. However, the Milky Way is part of a group of about 30 galaxies that are gravitationally bound together. It is known as the Local Group.
Ambassador: Thank you for your knowledge. I believe my time is up.

Orion Arm – is one of the spiral arms of the Milky Way galaxy and it is in this region of the galaxy where our solar system resides.

Local Group – is the name given to the group of galaxies of which the Milky Way is a member.

The name, Milky Way, comes from the milky appearance of the galactic plane, as seen from Earth.

The age of our galaxy is determined by the oldest observable star in it, which is about 13 billion years. This makes the Milky Way almost as old as the universe itself. It is a fairly large spiral galaxy with three main components:

Because we live inside the Milky Way we do not have direct images of the entire galaxy as seen from outside. After all, our farthest spacecraft have only reached the edge of the solar system. However, we can get an idea of what our galaxy looks like by viewing other galaxies, some of which have a similar structure to our own.

Multi-wave Milky Way – What the plane of the galaxy looks like when viewed in different wavelengths of light.