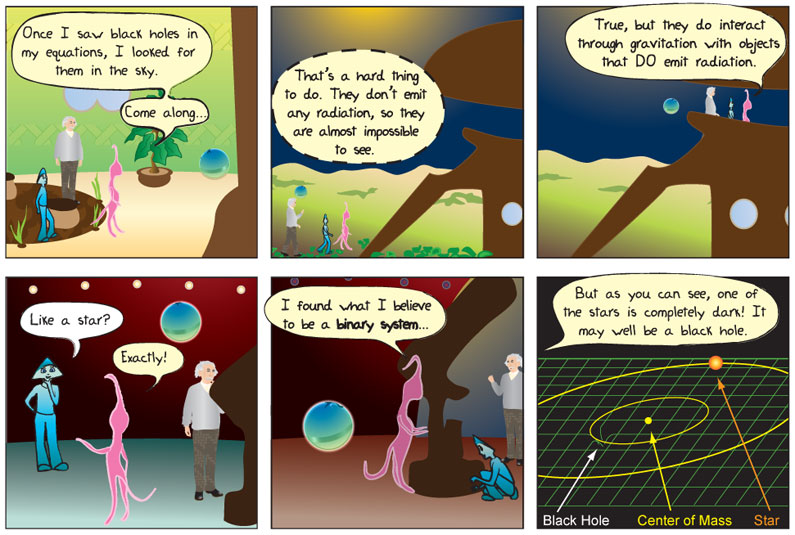 Panel 1.
Professor Ahmix: Once I saw black holes in my equations, I looked for them in the sky. Come along…

Panel 2.
Hologram Einstein: That’s a hard thing to do. They don’t emit any radiation, so they are almost impossible to see.

Panel 3.
Professor Ahmix: True, but they do interact through gravitation with objects that DO emit radiation.

Panel 5.
Professor Ahmix: I found what I Believe to be a binary system…

Panel 6.
Professor Ahmix: …but as you can see, one of the stars is completely dark! It may well be a black hole.

Binary System – This is a system of two stars, very close to each other, that orbit around their common center of mass. They are actually quite common.

Since black holes cannot be seen directly, scientists have to try and find evidence of them through more indirect means. One method is to watch as a star, or in some cases a group of stars, orbits around an object that is not readily detectable using electromagnetic radiation (light). By carefully measuring the orbits of these stars, astronomers can determine the mass of the invisible object they are orbiting. The most famous example of what is thought to be stars orbiting around a black hole is at the center of our own galaxy called Sagittarius A* (pronounced “Sagittarius A star”). By carefully measuring the orbits of stars around this black hole, astronomers have been able to estimate its mass to be around 3.7 million times that of our sun.

Milky Way Monster Stars in Cosmic Reality Show – High resolution image taken by the Chandra X-ray Observatory along with some facts about the black hole at the center of our galaxy.

UCLA Galactic Center Group – is part of the UCLA Physics and Astronomy department and is dedicated to researching the innermost regions of the Milky Way.