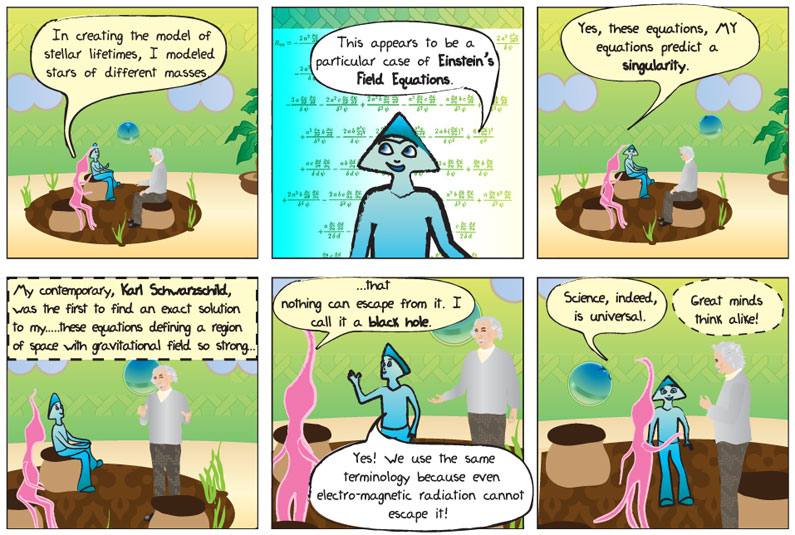 Panel 1.
Professor Ahmix: In creating the model of stellar lifetimes, I modeled stars of different masses.

Panel 2.
Alkina: This appears to be a particular case of Einstein’s Field Equations.

Panel 4.
Hologram of Einstein: My contemporary, Karl Schwarzschild, was the first to find an exact solution to my…these equations defining a region of space with gravitational field so strong…

Panel 5.
Professor Ahmix: …that nothing can escape from it. I call it a black hole.
Alkina: Yes! we use the same terminology because even electromagnetic radiation cannot escape it!

Einstein’s Field Equation – describes gravity as the curvature of space-time dependent on the mass that exists in it.

Singularity – In this context, singularity is a place in space where mass density and gravitational force become infinite.

Black Hole – A region of space within which the force of gravity (space-time curvature) is so strong that nothing, not even light, can escape from it.

Contrary to popular belief, black holes do not suck in things like a vacuum cleaner. If our Sun were to suddenly turn into a black hole, all the planets will continue orbiting it in exactly the same paths they currently follow. Of course, we would lose our source of light and heat, ending life as we know it.

Karl Schwarzschild (October 9, 1873 – May 11, 1916), a German scientist who did important work in the physics of photography as well as formulated the first exact solutions to Einstein’s General Relativity equations. He was fighting in World War I when he mailed Einstein his paper, which predicted the existence of black holes. Schwarzschild died of illness, not injury, a few months later without ever realizing the impact that his paper would have on the physics and astronomy communities.