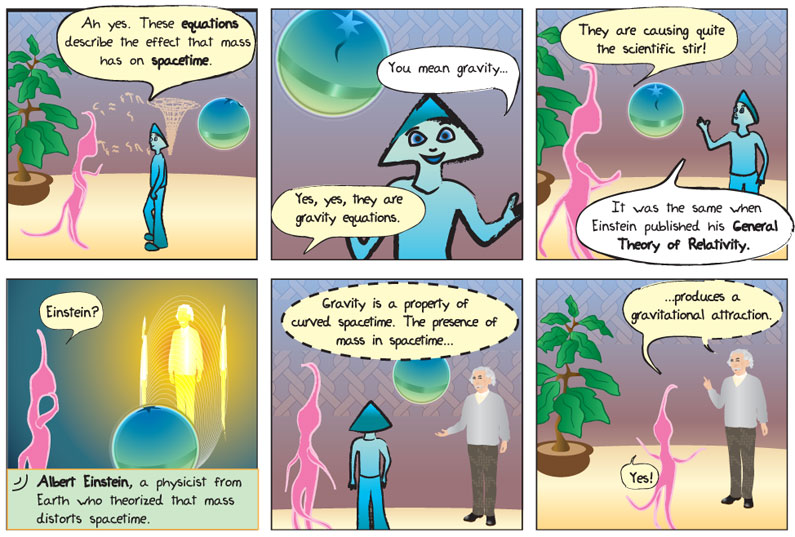 Panel 1.
Professor Ahmix: Ah yes. These equations describe the effect that mass has on spacetime.

Panel 3.
Professor Ahmix: They are causing quite the scientific stir!
Alkina: It was the same when Einstein published his General Theory of Relativity.

Panel 5.
Hologram of Einstein: Gravity is a property of curved spacetime. The presence of mass in spacetime…

Equation – An equation is a mathematical way of saying that two expressions are equal. Newton’s Second Law of Motion, F = ma, is an equation.

Spacetime – The three physical dimensions (length, width, and height), plus the dimension of time is spacetime. An object moving around in a volume over a period of time is moving through spacetime.

If you and a friend stretch out a piece of fabric between you, say an old t-shirt that your parents are okay with letting you stretch out, you will have created a two dimensional model of spacetime. Take a heavy ball and have a third friend place that ball in the middle of the t-shirt. You’ll see the ball “pulls” the fabric down with it, and the closer you are to the ball the steeper the bend (curvature) in the t-shirt. This is a model of General Relativity that is useful to help us understand how gravity affects spacetime, but we have to keep in mind it is only a model. Actual spacetime has three space dimensions and one time dimension, making a total of four dimensions. No one can picture four dimensions in their head, curved or not. Even Albert Einstein could not do this!

Albert Einstein was born on March 14th, 1879 and died on April 18th, 1955 at the age of 76. In addition to several other theories in physics, Einstein developed the General Theory of Relativity in 1915. Einstein used his theory in 1915 to explain Mercury’s strange orbit.

In 1919 the first independent observable evidence was supplied by astronomers, led by Arthur Stanley Eddington and Frank Dyson, in their observations during an eclipse where Sun’s gravitational effect on the light of a star was measured. Under Einstein’s General Relativity, the light from stars passing near the sun should be bent, such that if we could see stars “near” the sun they would appear to be in a slightly different location than when the sun was not there. During the eclipse, stars near the region of the Sun became visible, which was the first direct evidence of General Relativity.

In addition to General Relativity, some of Einstein’s more famous works include the Special Theory of Relativity and equations describing the Photoelectric Effect (which won him the Nobel Prize in Physics in 1921).