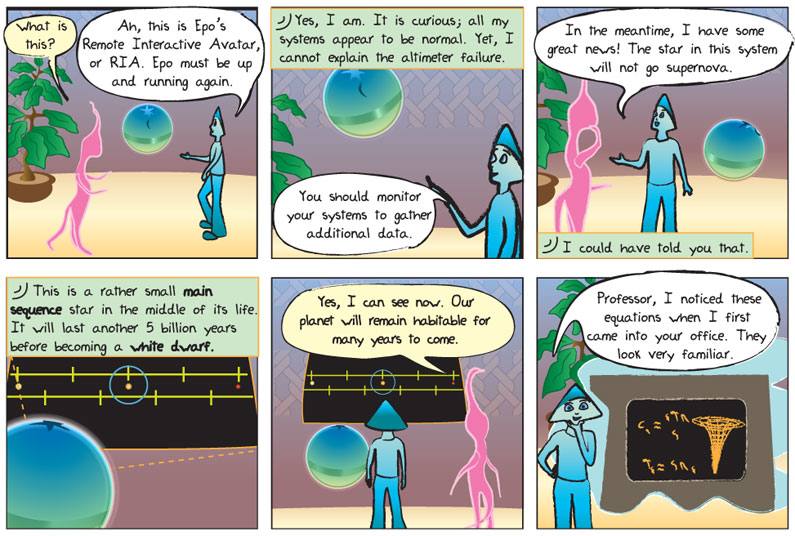 Panel 1.
Professor Ahmix: What is this?
Alkina: Ah, this is Epo’s remote Interactive Avatar, or RIA. Epo must be up and running again.

Panel 2.
Epo: Yes, I am. It is curious; all my systems appear to be normal. yet, I cannot explain the altimeter failure.
Alkina: You should monitor your systems to gather additional data.

Panel 3.
Alkina: In the meantime, I have some great news! The star in this system will not go supernova.
Epo: I could have told you that.

Panel 4.
Epo: This is a rather small main-sequence star in the middle of its life. It will last another 5 billion years before becoming a white dwarf.

Panel 5.
Professor Ahmix: Yes, I can see now. Our planet will remain habitable for many years to come.

Panel 6.
Alkina: Professor, I noticed these equations when I first came into your office. They look very familiar.

Main sequence star – is one whose main source of energy production is the fusing of hydrogen atoms into helium atoms. The rate at which this occurs and how much fuel it has is dependent upon the star’s mass.

White dwarf – is how a main sequence star that is not massive enough to go supernova ends its life when it exhausts all its nuclear fuel and expels most of its outer layers. It continues to radiate light energy due to heat remaining from the fusing process. This is analogous to how a piece of iron will continue to glow after the flame used to heat it up has been removed. The mass of a white dwarf is comparable to our Sun yet it only has the size of the Earth, making it very dense.