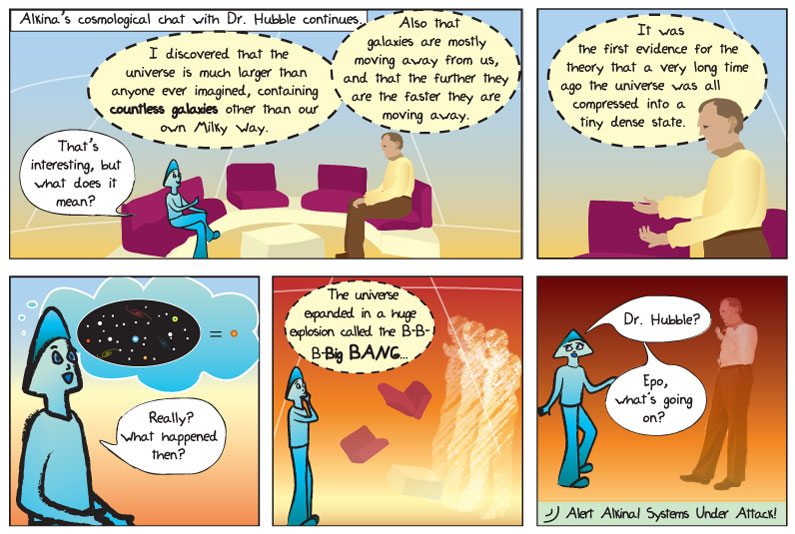 Panel 1.
Narration: Alkina’s cosmological chat with Dr. Hubble continues.
Hubble Projection: I discovered that the universe is much larger than anyone ever imagined, containing countless galaxies other than our own Milky Way. Also that galaxies are mostly moving away from us, and that the further they are the faster they are moving away.
Alkina: That’s interesting, but what does it mean?

Panel 2.
Hubble Projection: It was the first evidence for the theory that a very long time ago the universe was all compressed into a tiny dense state.

Panel 3.
Alkina: Really? What happened then?

Big Bang – This famous theory suggests that the universe was not always as it is today, and that at one point everything was compressed down into an extremely small point of unimaginable heat and density. Then, in the most violent and energetic event ever to occur, the universe began to expand and evolve into its present state. This rapid expansion was aptly named the “big bang.”

The term, big bang, was coined by an English astronomer, Sir Fred Hoyle, to mock the theory. He was a proponent of the steady state theory, which suggests that the universe looks, on the whole, the same at all times and places. In order to explain Hubble’s observations, this theory was modified to include the spontaneous creation of matter, which would keep the density of the universe at a constant value. The steady state theory had too many holes in it to be viable and was eventually dropped. However, the moniker, big bang, to describe the hot, dense beginning of the universe stuck and is now a part of astronomical vocabulary.

Before Edwin Hubble’s research, astronomers had been aware of the existence of spiral nebulae, strangely shaped “clouds” visible in the night sky, but did not know what they were. Moreover, the clouds were believed to be inside the Milky Way, which was thought to be the entire universe. Hubble astonished the astronomy world by demonstrating that these nebulae were distant galaxies like our own, and that the universe was many, many times larger than previously accepted by the astronomical community.

The center of the universe – Does the universe have a center? Use the link to find out. This page is also available in Spanish.