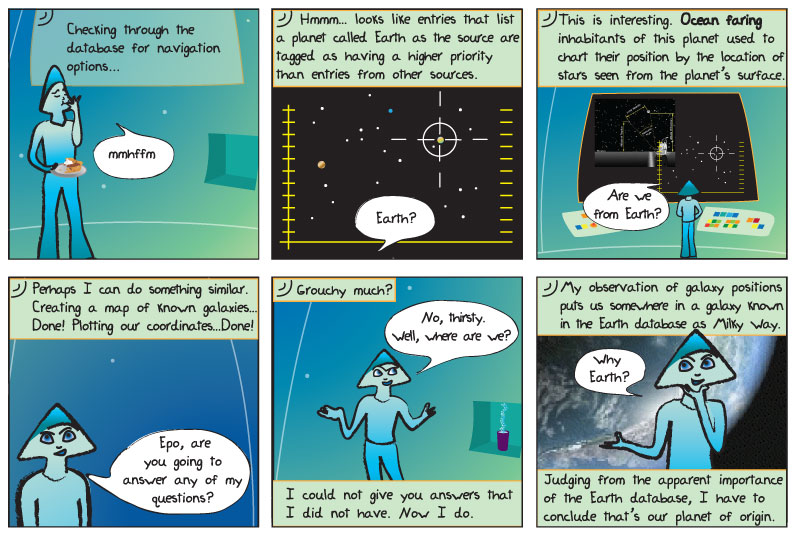 Panel 2.
Epo: Hmmm… looks like entries that list a planet called Earth as the source are tagged as having a higher priority than entries from other sources.
Alkina: Earth?

Panel 3.
Epo: This is interesting. Ocean faring inhabitants of this planet used to chart their position by the location of the stars seen from the planet’s surface.
Alkina: Are we from Earth?

Panel 4.
Epo: Perhaps I can do something similar. Creating a map of known galaxies… Done! Plotting our coordinates… Done!
Alkina: Epo, are you going to answer any of my questions?

Panel 5.
Epo: Grouchy much?
Alkina: No, thirsty. Well, where are we?
Epo: I could not give you answers that I did not have. Now I do.

Panel 6.
Epo: My observation of galaxy positions puts us somewhere in a galaxy known in the Earth database as the Milky Way.
Alkina: Why Earth?
Epo: Judging from the apparent importance of the Earth database, I have to conclude that’s our planet of origin.

As early as 1000 BCE the Phoenicians traveled the waters of the Mediterranean sea and, even as far as the Atlantic Ocean to the coasts of Britain. Like the Phoenicians, many other early cultures used the sea to travel and trade, such as the Norse and the inhabitants of the Pacific Islands.

While humans had been traveling on the oceans for thousands of years, they rarely traveled out of sight of land. If a ship did travel deep into the ocean they could become lost, especially if blown off course in a storm. But even these early travelers could use the sun or the stars as guides to help them get back to land.

In recognizing the patterns of the stars, or constellations; how they moved across the night sky and the position of sun during the day, experienced seafarers blown off course could use them to make their way back to land.

However, it was not until the invention of the magnetic compass and the mariner’s astrolabe in the middle ages (from 400 ACE to about 1500 ACE) that they were able to venture deep into the oceans for long voyages while out of sight of land. These tools, along with the sun and stars, helped travelers cross the oceans and they are even used to this day, although much of the work is now computerized.

Astrolabes, and other similar tools such as the kamal and the cross staff, are like rulers for the sky. A person can use these tools to measure the position of the stars against the horizon to determine their latitude; how far north or south they are on the Earth compared to a previously known position.

Wayfinding, or Non-Instrument Navigation – Even before instruments like the compass and sextants existed, Polynesians navigated open ocean voyages through careful observation of natural signs including a mental image of locations of stars, known as a star compass.