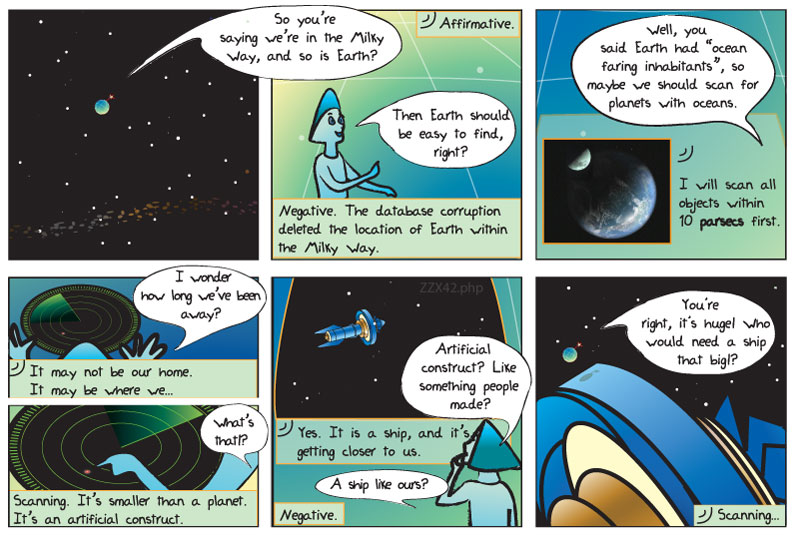 Panel 1.
Alkina: So, you’re saying we’re in the Milky Way, and so is Earth?

Panel 2.
Epo: Affirmative
Alkina: Then Earth should be easy to find, right?
Epo: Negative. The database corruption deleted the location of Earth within the Milky Way.

Panel 3.
Alkina: Well, you said Earth had “ocean faring inhabitants,” so maybe we should scan for planets with oceans.
Epo: I will scan all objects within 10 parsecs first.

Panel 4.
Alkina: I wonder how long we’ve been away?
Epo: It may not be our home. It may be where we…
Alkina: What’s that?
Epo: Scanning. It’s smaller than a planet. It’s an artificial construct.

Panel 5.
Alkina: Artificial construct? Like something people made?
Epo: Yes. It is a ship, and it’s getting closer to us.
Alkina: A ship like ours?
Epo: Negative.

Parsec – is another measuring stick used by astronomers. One parsec equals about 3.3 lightyears.

Parsec is short for parallax of one arcsecond*, the distance at which the parallax of an object is one arcsecond. It is based on the parallax of a given star, i.e., how much the star appears to change its position in the sky as the Earth orbits around the Sun. To understand the basic idea, hold your arm straight out in front of your face with your thumb pointing straight up. While looking at your thumb, first close one eye, then the other, switching alternately between one eye to the other. You will see your thumb move back and forth against the background as you switch from one eye to the next. Now move your thumb about half the distance to your nose and do the same exercise. You will see that your thumb appears to move through a much larger angle against the background. This is how parallax works. To measure the distance of a star using parallax, imagine that one of your eyes is like the position of the Earth at some point in its orbit. Your other eye will then be like the Earth’s position six months later, when it is on the opposite side of the orbit.

Instead of looking at your thumb, imagine that you are an astronomer carefully measuring the position of a star when the earth is on one side of the sun and then again six months later when the earth is on the other side of the sun. If the star is close enough, you will see it move back and forth slightly against background stars, just as your thumb moved against the background. The farther the star is from the Sun, the smaller its parallax angle; there is a very simple mathematical relation between the parallax angle, the size of the Earth’s orbit, and the distance to the star. This relationship allows astronomers to deduce the distance to any stars that show a parallax. Unfortunately, even for quite nearby stars the angle is very small. For distance stars it is so small that it cannot be measured from the ground, so most stars do not show any parallax shift at all: Think about trying to see your thumb shift back and forth if your arm was as long as a football field.