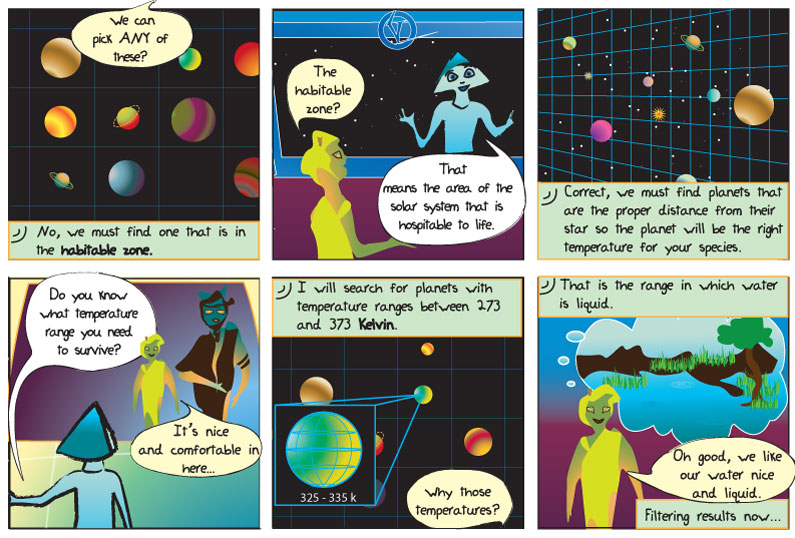 Panel 1.
Granddaughter: We can pick ANY of these?
Epo: No, we must find one that is in the habitable zone.

Panel 2.
Granddaughter: The habitable zone?
Alkina: That means the area of the solar system that is habitable to life

Panel 3.
Epo: Correct, we must find planets that are the proper distance from their star so the planet will be the right temperature for your species.

Panel 4.
Alkina: Do you know what temperature range you need to survive?
(Granddaughter): It’s nice and comfortable in here…

Panel 5.
Epo: I will search for planets with temperature ranges between 273 and 373 Kelvin.
Granddaughter: Why those temperatures?

Panel 6.
Epo: That is the range in which water is liquid.
Granddaughter: Oh good, we like our water nice and liquid.
Epo: Filtering results now…

Kelvin – is the standard unit that scientists use to measure temperature. The temperature at which water freezes on the surface of Earth is 273 Kelvin, and the temperature that water boils is 373 Kelvins.

Goldilocks Zone – The Habitable Zone is also called the “life zone,” “green belt,” or “Goldilocks zone.” It is the distance of a planet from a star at which the temperature of the planet allows for liquid water. This is the temperature range that scientists think would sustain life. Too far away from the star, and any water on the planet will be frozen; too close and it boil off. This distance depends on the size and heat energy output of the star around which the planets orbit.