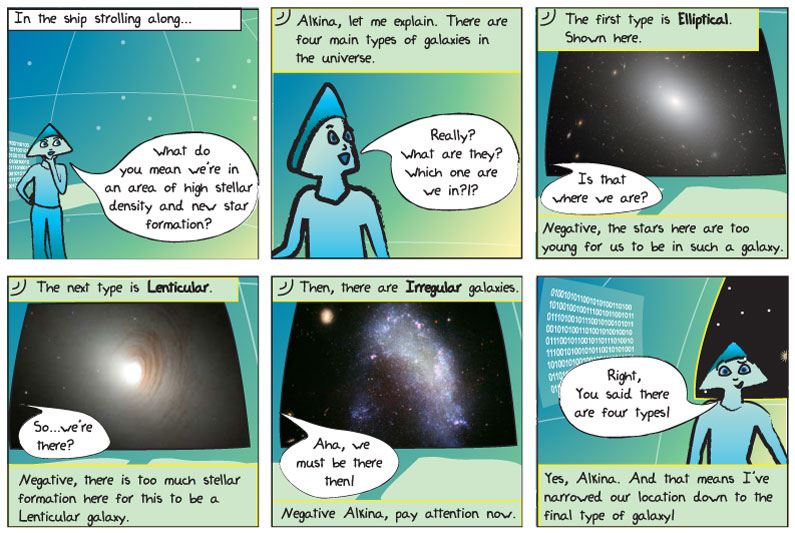 Panel 1.
Narration: In the ship strolling along…
Alkina: What do you mean we’re in an area of high stellar density and new star formation?

Panel 2.
Epo: Alkina, let me explain. There are four main types of galaxies in the universe.
Alkina: Really? What are they? Which one are we in?!?
Epo: The first type is Elliptical. Shown here.

Panel 3.
Alkina: Is that where we are?
Epo: Negative, the stars here are too young for us to be in such a galaxy.

Panel 4.
Epo: The next type is Lenticular.
Alkina: So…we’re there?
Epo: Negative, there is too much stellar formation here for this to be a Lenticular galaxy.

Panel 5.
Epo: Then, there are Irregular galaxies.
Alkina: Aha, we must be there then!
Epo: Negative Alkina, pay attention now.

Panel 6.
Alkina: Right, You said there are four types!
Epo: Yes, Alkina. And that means I’ve narrowed our location down to the final type of galaxy!

Elliptical Galaxies – These galaxies range in shape from nearly spherical to flattened disks. They are characterized by a much older population of stars. They also have very low rates of star formation, meaning very few stars are being born here. Ellipticals contain little or no cool gas or dust. The image shown is that of NGC 1132, a massive elliptical galaxy some 300 million lightyears away in the constellation Eridanus.
Credit: Space Telescope Science Institute.

Lenticular Galaxies – These galaxies are flattened disks like the spiral galaxy. They do not, however, have the spiraling arms, and have much lower rates of new star formation. Similar to ellipticals, lenticular galaxies have little or no cool gas or dust. The image shown is that of NGC 2787, a barred lenticular galaxy about 24 million lightyears away in the constellation Ursa Major.
Credit: Hubble Heritage Team.

Irregular Galaxies – These are the galaxies that do not fit into any of the other three categories. Pictured is NGC 1427a, an irregular galaxy 67 million lightyears away in the constellation Eridanus. NGC 1427a is being torn apart by the gravitational forces of its neighboring galaxies: the Fornax cluster.
Credit: Space Telescope Science Institute.

The Hidden Lives of Galaxies – This Imagine site is targeted mostly at teachers and includes classroom activities.

Make a Galactic Mobile – Make a beautiful mobile of galaxies to turn and sparkle in the wind. Pattern and instructions included.