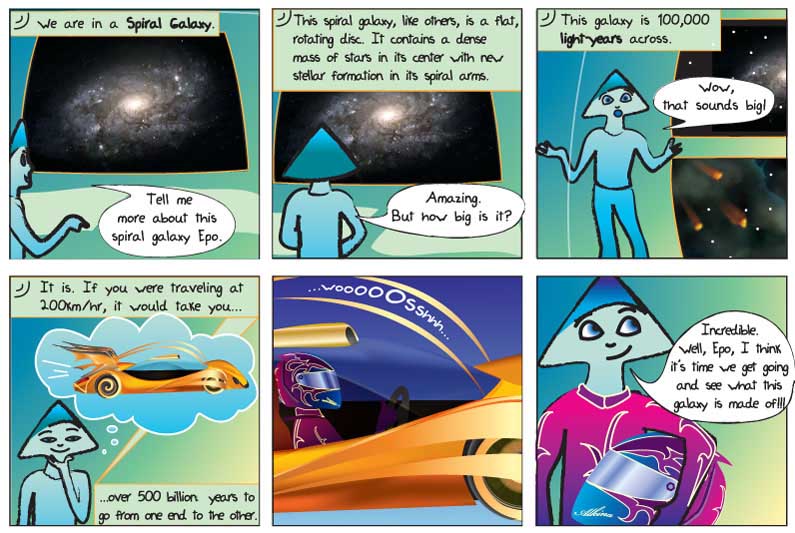 Panel 1.
Epo: We are in a Spiral Galaxy.
Alkina: Tell me more about this spiral galaxy Epo.

Panel 2.
Epo: This spiral galaxy, like others, is a flat, rotating disc. It contains a dense mass of stars in its center with new stellar formation in its spiral arms.
Alkina: Amazing. But how big is it?

Panel 5.
Alkina: Incredible. Well, Epo, I think it’s time we get going and see what this galaxy is made of!!!

Spiral Galaxy – These galaxies are flattened disks with long spiraling arms that extend out from a central core or bulge. In the arms are large amounts of interstellar matter which lead to high rates of new star formation.

One Light-year – The distance that light travels in one year, which is about 10 trillion kilometers. Since light travels so fast, it covers a lot of distance in a small amount of time and because the universe is so large it makes it easy for astronomers to use light-years as a measuring stick.

Now compare this to the time is takes to cross Epo and Alkina’s galaxy, which is 500,000,000,000 years traveling at 200 km/hr. Their galaxy, which is just one of the billions of galaxies out there, is very big!

What is a light-year and how is it used? – Click on the link to find out the answer.