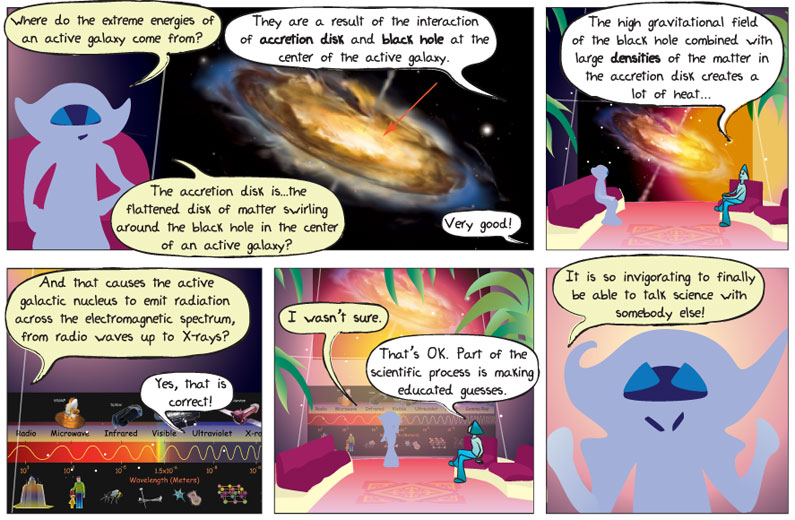 Panel 2.
Alkina: The high gravitational field of the black hole combined with large densities of the matter in the accretion disk creates a lot of heat…

Panel 3.
Ceyla: And that causes the active galactic nucleus to emit radiation across the electromagnetic spectrum, from radio waves up to X-rays?
Alkina: Yes, that is correct!

Panel 5.
Ceyla (beaming): It is so invigorating to finally be able to talk science with somebody else!

Accretion disk – A disk of matter that forms when material is transferred to a gravitationally massive body, such a black hole. For black holes, the disks form outside the event horizons. For other objects, such as neutron stars or white dwarfs, the disks can extend down to the stellar surfaces. Friction and other forces heat the disks, which then emit a a wide range of different types of electromagnetic radiation including x-rays.

Black hole – A region of space within which the force of gravity (space-time curvature) is so strong that nothing, not even light, can escape from it.

Contrary to popular belief, black holes do not suck in things like a vacuum cleaner. For example, if the Sun were to suddenly collapse into a black hole (something that its low mass precludes), all the planets would continue orbiting it in exactly the same paths they currently follow; the gravitational effect of the Sun on a planet depends only on its mass and its distance from the planet, not on the Sun’s size, and shrinking the Sun to a black hole would affect neither its mass nor its distance from the various planets.

Particles falling into a black hole generally do not start out moving directly at it. Physicists would say that the particles have angular momentum, a quantity that cannot be created or destroyed. For this reason, rather than falling directly into the black hole, material forms a spinning disk around it. This allows nearly all of the angular momentum of the disk material to be transferred to a small amount of material that is thrown outward, while most of the material itself spirals inward. See the video below of this process in action.

Ask an Expert: Why Black Holes Suck. Or Do They? – A chat with Gerald (Jerry) Fishman, an research astrophysicist, about black holes.