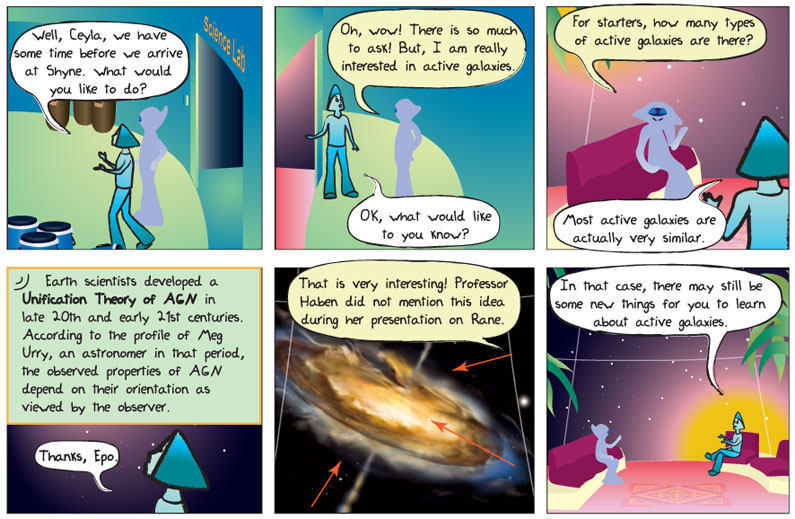 Panel 1.
Alkina: Well, Ceyla, we have some time before we arrive at Shyne. What would you like to do?

Panel 2.
Ceyla (excited): Oh, wow! There is so much to ask! But, I am really interested in active galaxies.
Alkina: OK, what would like to you know?

Panel 3.
Ceyla: For starters, how many types of active galaxies are there?
Alkina: Most actives galaxies are actually very similar.

Panel 4.
Epo: Earth scientists developed a Unification Theory of AGN in late 20th and early 21st centuries. According to the profile of Meg Urry, an astronomer in that period, the observed properties of AGN depend on their orientation as viewed by the observer.
Alkina: Thanks, Epo.

Panel 5.
Ceyla: That is very interesting! Professor Haben did not mention this idea during her presentation on Rane.

Panel 6.
Alkina (smiling): In that case, there may still be some new things for you to learn about active galaxies.

Unification of Active Galaxies – is the theory that active galaxies are essentially all the same and that the different observed features are due to the orientation of the galactic plane with respect to the viewer.

Galaxies, even if they are very similar, look different depending on the angle at which we view them.

In the beginning of the animation below, the galaxy looks like a thin line. As the camera rotates to point B, we see that it look more like an oval, while at point C it looks almost circular. The amount and wavelengths of light visible from the galaxy also changes as the camera rotates allowing us to see different characteristics of the galaxy.

We will learn in upcoming episodes how different active galaxies can look depending on the angle at which they are viewed.

Even though we cannot look at other galaxies from different sides because of their vast distances from us, scientists are able to look at many different active galaxies in different wavelengths from radio to gamma-rays allowing them to determine that all active galaxies are fueled by similar mechanisms.