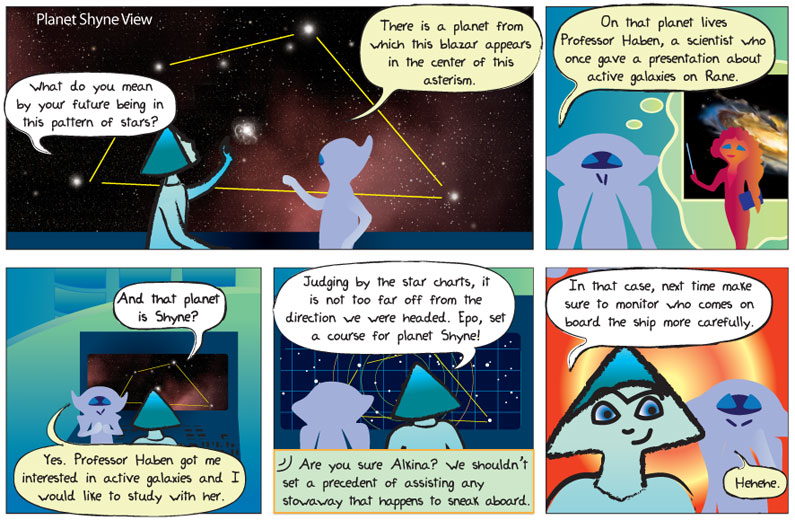 Panel 1.
Alkina: What do you mean by your future being in this pattern of stars?
Ceyla: There is a planet from which this blazar appears in the center of this asterism.

Panel 2.
Ceyla: On that planet lives Professor Haben, a scientist who once gave a presentation about active galaxies on Rane.

Panel 3.
Alkina: And that planet is Shyne?
Ceyla: Yes. Professor Haben got me interested in active galaxies and I would like to study with her.

Panel 4.
Alkina: Judging by the star charts, it is not too far off from the direction we were headed. Epo, set a course for planet Shyne!
Epo: Alkina, are you sure you want to do this? We shouldn’t set a precedent of assisting any stowaway that happens to sneak aboard.

Panel 5.
Alkina: In that case, next time make sure to monitor who comes on board the ship more carefully.
Ceyla: Hehehe.

We have talked about navigating by stars in a previous episode. In this episode, Ceyla is telling Alkina how a pattern of stars against a background object, a blazar, looks from the planet Shyne. Below is an animation of what Ceyla is saying.