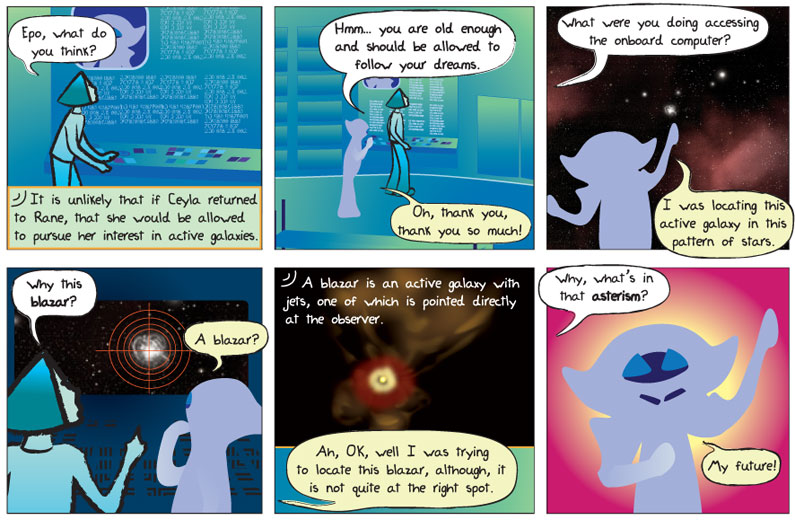 Panel 1.
Alkina: Epo, what do you think?
Epo: It is unlikely that if Ceyla returned to Rane, that she would be allowed to pursue her interest in active galaxies.

Panel 2.
Alkina: Hmm… you are old enough and should be allowed to follow your dreams.
Ceyla: Oh, thank you, thank you so much!

Panel 3.
Alkina: What were you doing accessing the onboard computer?
[Pointing to a blazar on display.]
Ceyla: I was locating this active galaxy.

Panel 4.
Alkina: Why this blazar?
Ceyla: A blazar?

Panel 5.
Epo: A blazar is an active galaxy with jets, one of which is pointed directly at the observer.
Ceyla: Ah, OK. I was trying to locate this blazar in this pattern of stars. Although, it is not quite at the right spot.

Panel 6.
Alkina: Why, what’s in that astrism?
Ceyla: My future!

Blazar – is an active galaxy with jets, one of which is pointed directly at the observer. Blazars are the most common source of high-energy gamma-ray emission.

Asterism – is a pattern of stars as seen on Earth’s night sky as opposed to a constellation, which is a defined area of the sky as seen from Earth.

You may wonder why we use the term asterism when it is defined as something seen with respect to Earth. While that is the definition of the word, potential space travelers of the future will need a way to mark their locations, which they will do using patterns of stars visible from their position. Rather than saying “patterns of stars” over and over again, it would make sense for them to use a word like “asterism.”