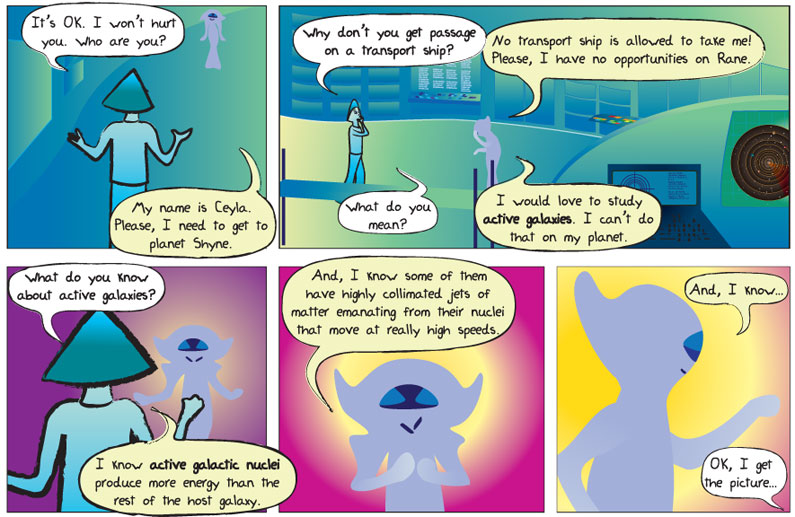 Panel 1.
Alkina: It’s OK. I won’t hurt you. Who are you?
Ceyla: My name is Ceyla. Please, I need to get to planet Shyne.

Panel 2.
Alkina: Why don’t you get passage on a transport ship?
Ceyla: No transport ship is allowed to take me! Please, I have no opportunities on Rane.
Alkina: What do you mean?
Ceyla: I would love to study active galaxies. I can’t do that on Rane.

Panel 3.
Alkina: What do you know about active galaxies?
Ceyla: I know active galactic nuclei produce more energy than the rest of the host galaxy.

Panel 4.
Ceyla: And, I know some of them have highly collimated jets of matter emanating from their nuclei that move at really high speeds.

Active galaxy – A class of galaxy that emits enormous amounts of energies from its center.

Active galactic nucleus (AGN) – The central, compact region of of an active galaxy, which is the source of most of the host galaxy’s emitted energy. The plural of nucleus is nuclei.

A galaxy is a system of stars, gas, and dust bound together by their mutual gravity. A typical galaxy has billions of stars, and some have trillions. Although they come in many different shapes, the basic structure is the same: a dense core of stars called a ‘nucleus’ surrounded by stars and gas. Normally, the core of a disk or elliptical galaxy is small, relatively faint, and composed of older, redder stars. However, in some galaxies the core is intensely bright, shining with power equivalent to trillions of suns, easily outshining the rest of the light of the galaxy combined. A galaxy that emits such tremendous amounts of energy is called an active galaxy. Active galaxies are actually rare, but so bright they can be seen clear across the visible Universe.

We brought up a couple of scientific observations that we have not fully explained. How do active galaxies generate so much energy in their nuclei? Why do some active galaxies have jets? The answers to these questions and more will be revealed in future episodes, so stay tuned.