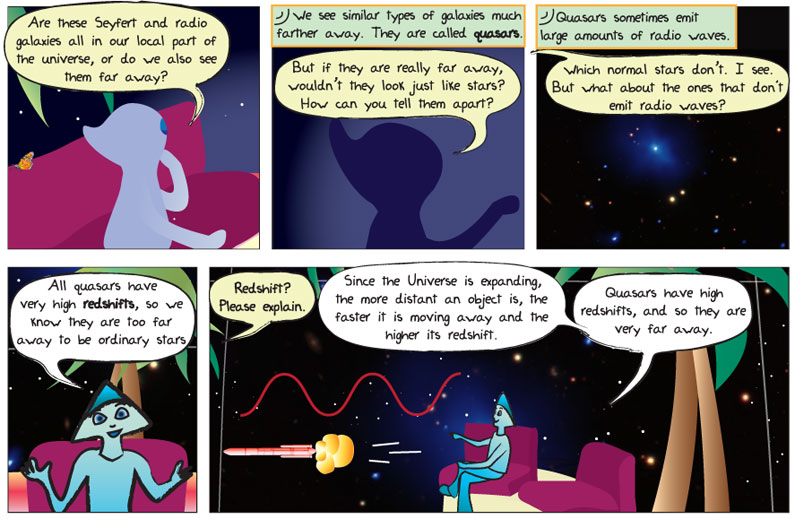 Panel 1.
Ceyla: Are these Seyfert and radio galaxies all in our local part of the universe, or do we also see them far away?

Panel 2.
Epo: Seyferts and radio galaxies are nearby, but we see similar types of galaxies farther away. They are called quasars.
Ceyla: But if they are really far away, wouldn’t they look just like stars? How can you tell them apart?

Panel 3.
Epo: Quasars sometimes emit large amounts of radio waves.
Celya: Which normal stars don’t. I see. But what about the ones that don’t emit radio waves?

Panel 4:
Alkina: All quasars have very high redshifts, so we know they are too far away to be ordinary stars.

Panel 5.
Ceyla: Redshift? Please explain.
Alkina: Since the Universe is expanding, the more distant an object is, the faster it is moving away and the higher its redshift. Quasars have high redshifts, and so they are very far away.

Quasar – A quasar (quasi-stellar radio source) is an active galaxy so distant, it appears star-like.

Redshift (cosmological) – This is the name given to the apparent change in the wavelength of light due to the expansion of the universe. Scientists know what the spectrum of a galaxy should look like (based on the laboratory spectra of light emitted from known elements). In all but a few nearby galaxies, the familiar spectral lines are shifted to longer wavelengths than would be measured in a laboratory. Red light is at the long wavelength end of the visible spectrum, and blue light is at the short wavelength end, so shifts to longer wavelengths are called redshifts. The cosmological redshift is denoted by the letter z, and it is defined such that the universe has expanded by an amount 1+z over the time the light has traveled to us. So an object with redshift z=1 is seen when the universe was half its present size (it is twice as big as when the light was emitted), if z=2 the universe is three times bigger than when the light was emitted, if z=3 the universe is four times bigger, and so on.

When they were first discovered in the 1950s, scientists weren’t quite sure what to make of quasars. They are extremely far from us and so look like stars. But unlike stars, they are often an intense source of radio waves and are intensely blue in color, with no obviously recognizable stellar absorption lines in their spectra. You should not confuse their blue color with a blueshift. All of these objects have large redshifts, but redshift refers to a shift in the spectral lines. It does not refer to the color of the object. The related QSOs look the same as quasars in optical, but are not bright in the radio. Scientists gave this new type of object the moniker, quasi-stellar radio source for those that were bright in the radio, and quasi-stellar object for those that were not. Quasi means “resembling” and stellar means “star-like.” As astronomers discovered more of these objects, quasi-stellar radio source was shortened to quasar, and quasi-stellar object to QSO. It wasn’t until the 1980s that quasars and QSOs were classified as types of active galaxies.

In the two images above, the left image is a photograph of a quasar (inside the circle) surrounded by stars. Notice how they look very similar. The right image is a spectrum of a quasar, which shows different characteristics than a spectrum of a star (shown below). Quasar image credits: Mark Subbarao, Sloan Digital Sky Survey. 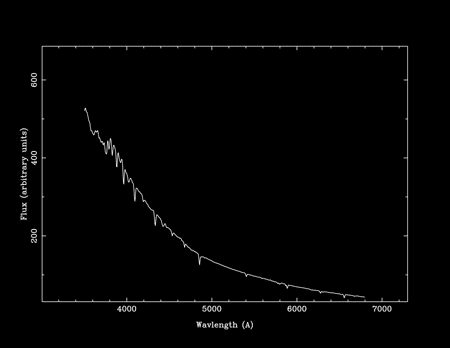 Sloan Digital Sky Survey (SDSS) – SDSS’s website about quasars along with activities you can do using real data.

Redshift Gallery: Quasars – A webpage with a table that shows how quasars at different redshifts appear to us, both photometrically and spectroscopically.

QUASARS – A Astronomy Cast podcast episode talking about quasars and other types of galaxies along with links to other active galaxy resources.