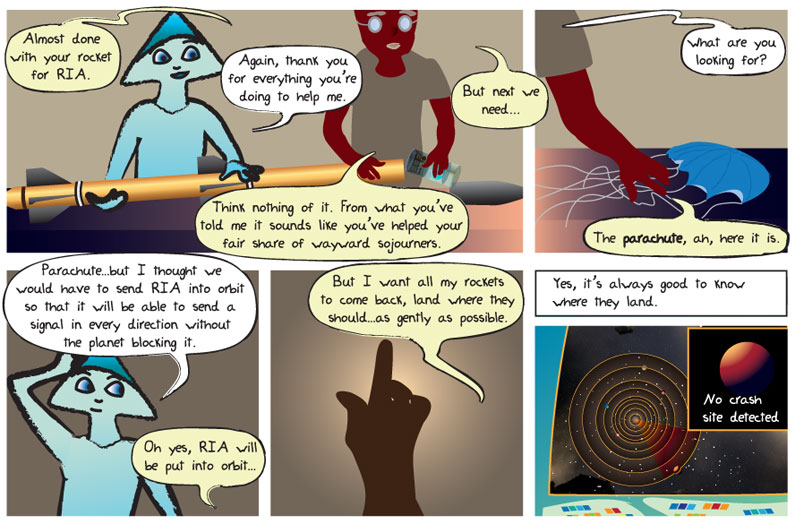 Panel 1
G’SWIGT: Almost done with your rocket for RIA.
ALKINA: Again, thank you for everything you’re doing to help me.
G’SWIGT: Think nothing of it. From what you’ve told me it sounds like you’ve helped your fair share of wayward sojourners. But next we need…

Panel 2
ALKINA: What are you looking for?
G’SWIGT: The parachute, ah, here it is.

Panel 3
ALKINA: Parachute…but I thought we would have to send RIA into orbit so that it will be able to send a signal in every direction without the planet blocking it.
G’SWIGT: Oh yes, RIA will be put into orbit…

Panel 4
G’SWIGT: But I want all my rockets to come back, land where they should…as gently as possible.

Panel 5
[Epo’s instruments ‘scanning’ a planet in the cluttered system with the text ‘No crash site detected’ on the display]
ALKINA-NARATION: Yes, it’s always good to know where they land.

parachute – a device, commonly a large sheet of cloth, that increases the effects of drag on a falling object so as to allow it to safely descend.

Parachutes also serve an additional purpose in rocketry as the total duration of a rocket’s flight is quite short. Adding a parachute-controlled descent allows greater airtime in which on-board payloads can gather data.