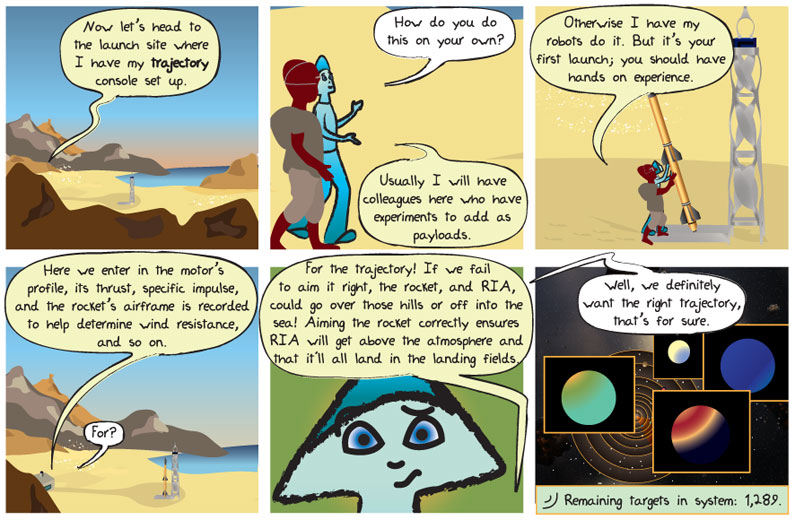 Panel 1
[Alkina overloading herself with the rocket, RIA, G’Swigt’s notes, etc.]
G’SWIGT: Now let’s head to the launch site where I have my trajectory console set up.

Panel 2
[Outside at launch pad, setting rocket up on rails, Alkina and G’Swigt straining slightly to push the rocket vertical]
ALKINA: How do you do this on your own?
G’SWIGT: Usually I will have colleagues here who have experiments to add as payloads.

Panel 3
G’SWIGT: Otherwise I have my robots do it. But it’s your first launch; you should have hands on experience.

Panel 4
[Back at the console that overlooks the launch pad from a safe distance]
G’SWIGT: Here we enter in the motor’s profile, its thrust, specific impulse, and the rocket’s airframe is recorded to help determine wind resistance, and so on.
ALKINA: For?

Panel 5
G’SWIGT: For the trajectory! If we fail to aim it right, the rocket, and RIA, could go over those hills or off into the sea! Aiming the rocket correctly ensures RIA will get above the atmosphere and that it’ll all land in the landing fields.

trajectory – the path that an object takes, especially for launched or flying objects.

In model rocketry today, the rockets do not have guidance systems that allow for control or fine-tuning of the trajectory after lift-off. G’swigt needs to aim the rocket on the launch pad and take into consideration the velocity of the wind over the course of the rocket’s flight path. He must also perform some routine tasks, even simply making sure the rocket is pointed up.

In rocketry, maps of the launch area are created which show the projected region in which the rocket and payload will land. But these maps assume the rocket was aimed correctly in the first place. When rockets are not properly aligned on the launch pad they can land far from the intended recovery area and pose severe risk to anyone in the rockets new flight path. Safety is number-one in rocketry.