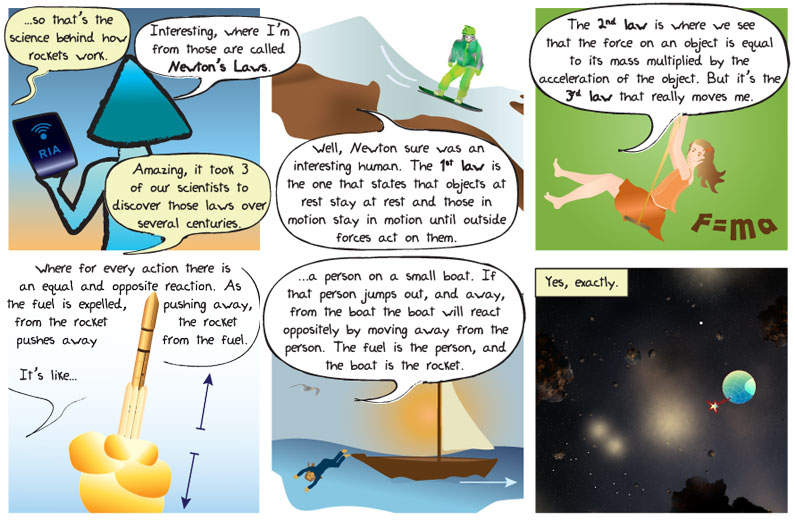 Panel 1
[Still at launch pad console]
G’SWIGT: …so that’s the science behind how rockets work.
ALKINA: Interesting. From where I’m from those are called Newton’s Laws.

Panel 2
G’SWIGT: Wow, it took 3 of our scientists to discover those laws over several centuries.
ALKINA: Well, Newton sure was an interesting human. The 1st law is the one that states that objects at rest stay at rest and those in motion stay in motion until outside forces act on them.

Panel 3
ALKINA: The 2nd law is where we see that the force on an object is equal to its mass multiplied by the acceleration of the object. But it’s the 3rd law that really moves me.

Panel 4
ALKINA: Where for every action there is an equal and opposite reaction. As the fuel is expelled, pushing away, from the rocket the rocket pushes away from the fuel. It’s like…

Panel 5
[Boat analogy in Alkina’s mind]
ALKINA: a person on a small boat. If that person jumps out, and away, from the boat the boat will react oppositely by moving away from the person. The fuel is the person, and the boat is the rocket.

2nd law of Motion – This law tells us that a net force acting on an object will change its velocity by changing either its speed or its direction or both.

3rd law of Motion – This law states that for every action, there is an equal and opposite reaction.

Newton’s laws of motion provide the basic foundation to understanding force and movement in our everyday life. The development of these laws was one of the major developments in science in the 17th century. Newton published his findings in 1687, over 300 years ago, and we still use them.

But like G’swigt’s planet’s history, Newton wasn’t the only one to think of these natural laws, he was just the first to formulate them in such a clear, concise, and cohesive way. For example, about half a century earlier, Galileo Galilei’s work with falling masses and thought experiments involving being below deck on smoothly sailing ships, and Johannes Kepler’s study of the motions of the planets set the stage for Newton’s ideas to take shape. Newton wrote to a colleague in 1675, “If I have seen further it is by standing on the shoulders of giants.” He was referring to those earlier scientists, like Galileo and Kepler, upon whose work his own discoveries rested.