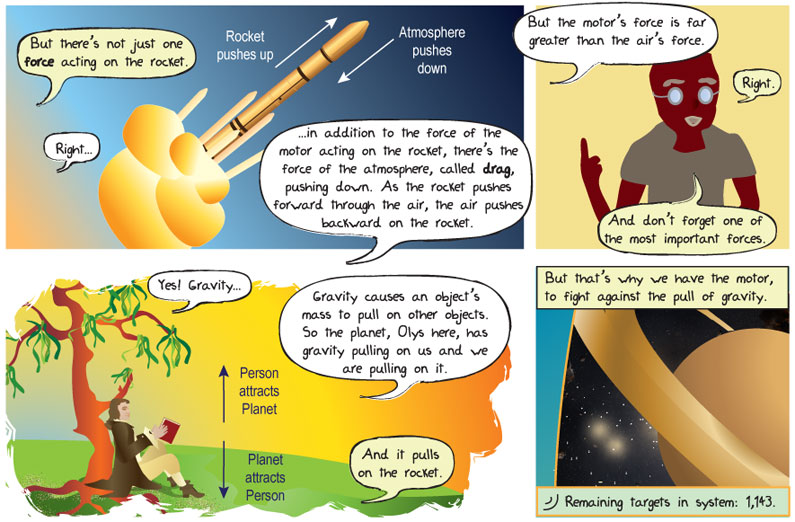 Panel 1
G’SWIGT: But there’s not just one force acting on the rocket.
ALKINA: Right…

Panel 3
ALKINA: But the motor’s force is far greater than the air’s force.
G’SWIGT: Right.

Panel 4
G’SWIGT: And don’t forget one of the most important forces.
ALKINA: Yes! Gravity…

Panel 5
ALKINA: Gravity causes an object’s mass to pull on other objects. So the planet, Olys here, has gravity pulling on us, and we are pulling on it.
G’SWIGT: And it pulls on the rocket

Panel 6
[Epo searching the rings of a gas giant, Console display reads. Remaining targets in system: 1,143]
G’SWIGT -NARATION: But that’s why we have the motor, to escape the pull of gravity.

Force – is that which causes a change in an object’s speed or direction.
Drag – the force acting on an object opposite the direction of its travel.
Gravity – the universal force of attraction between any two masses.

G’swigt and Alkina’s conversation is a continuation of their discussion from the previous episode. Here they are talking about the various forces that affect a rocket’s flight; namely drag and gravity.

Have you ever wondered why rockets are shaped the way they are? They are designed so as to reduce the amount of drag they experience. As an object travels through a substance like air or water, it pushes against that medium. As a result, the medium pushes back. However, the amount of pushing, the drag, can be reduced if the shape of the object allows the air or water to easily slide past. That is why rockets, airplanes and boats are shaped the way they are – the shape lets the water or air slide past more easily.