Panel 2.
Epo: Calculating path.
Alkina: Epo, what debris field?
Epo: The remains of the formation of this solar system

Panel 3.
Granddaughter: Huh?
Alkina: They are objects that formed when the solar system was really young.

Panel 4.
Alkina: As the planets formed closer to the star, they caused materials that did not become part of the planets to be flung out toward the outer parts of the solar system.

Panel 5.
Granddaughter: Are they dangerous?
Alkina: Only if we run into them.

Panel 6.
Granddaughter: Epo, make sure we don’t hit any of these things.
Epo: we will be out of this debris field in no time.

Solar/star system – is defined as a system of celestial objects such as planets and asteroids orbiting one or more stars.

Scientists theorize that typical solar systems form when materials such as gas and dust in interstellar space begin to coalesce, or combine due to their mutual gravitational attraction. This spheroidal (ball-shaped) collection of matter has a little bit of spin to it (see image below). The matter along the X-axis falls towards the center, and the matter perpendicular (or at right angle) to X continues to spin around the center. This combination process speeds up the rotation around the center (sort of like how water starts to rotate as it goes down the drain). As the gas and dust particles combine, the center of the collection begins to heat up. 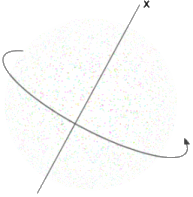 Once the central concentration of mass is large enough and heats up sufficiently, a thermonuclear reaction will start that will fuse hydrogen atoms together, resulting in the birth of a new star.

While most of the mass gets concentrated in the center, clumps of matter begin to form at different radii, or distances from the center. These will eventually become planets and moons. However, not everything in these regions become parts of planets or moons.

Due to gravitational interactions with the larger clumps of matter, some objects get flung away from the center. They never attain enough mass to become planets and usually occupy gravitationally favorable regions. In our solar system, we have an asteroid belt between Mars and Jupiter, the Kuiper Belt (which lies beyond the planet Neptune) and the Oort Cloud (the theoretical “fence” of our solar system) that are the homes to these objects.

Solar System Exploration – is part of NASA’s Office of Space Science and describes NASA’s program to explore the solar system.

How many solar systems are in our galaxy? – Dr. Marc at The Space Place answers this student question.

The density of objects in the debris field in this episode (and usually in movies where there is a spaceship zipping about to avoid collisions with asteroids) has been exaggerated for dramatic effect. This is not typical. Space is big, VERY big, and the distances between space objects is typically very large.