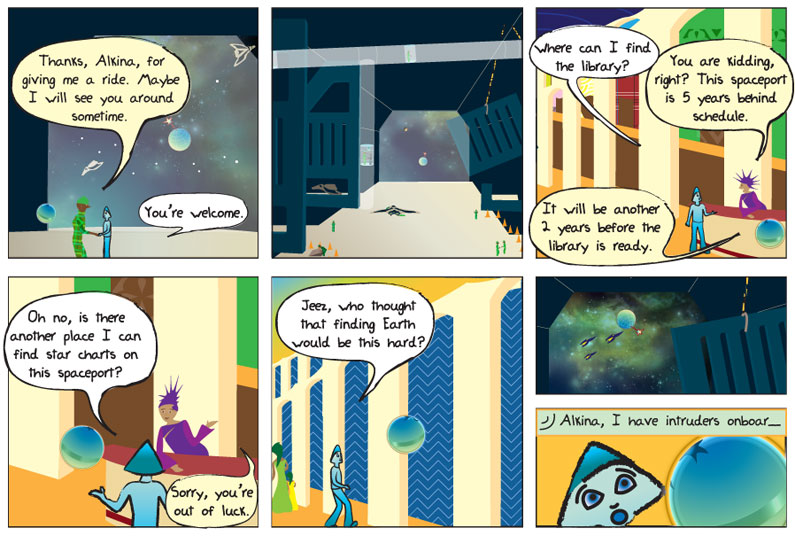 Panel 1.
Jakor: Thanks, Alkina, for giving me a ride. Maybe I will see you around sometime.
Alkina: You’re welcome.

Panel 3.
Alkina: Where can I find the library?
Station employee: You’re kidding, right? This spaceport is 5 years behind schedule. It will be another 2 years before the library is ready.

Panel 4.
Alkina: Oh no, is tehre somewhere else I can find star charts on this spaceport?
Station employee: Sorry, you’re out of luck.

Panel 5.
Alkina: Jeez, who thought that finding Earth would be this hard?

Panel 6.
Epo: Alkina, I have intruders on boar-

Navigating from one part of the galaxy to another is quite different from going from one city to another on Earth. On Earth, if someone is giving you directions, they need to provide you with two bits of information, how far forward or backwards and how far left or right you have to go from your current position to get to where you are going. It is as if you were traveling on a flat sheet of land. In space, you can also move forward and back, left and right, but you also have to worry about traveling perpendicular, or at right-angles, to those two directions… what would be called “up” and “down” on Earth. In space there is no up or down, so those terms are not quite correct, but they give a certain sense of what we mean.

Since there are no sign posts in space, you could use constellations, or patterns of stars as they appear in the sky to navigate from one part of the galaxy to another. But, it is not quite that easy.

The position of stars, as viewed by a space explorer, will appear to change as she or he moves through the galaxy. Once you move a few lightyears from your current location, the pattern of stars changes. Throw in billions of stars and you can imagine how complex navigating a galaxy becomes.

Another way to look at this is to imagine walking through a forest. As you travel along, the pattern of trees is constantly changing as you pass by them. Replace the trees with stars and the forest with the galaxy, and you can understand why the stars will appear to change position as you travel large distances from the Sun.