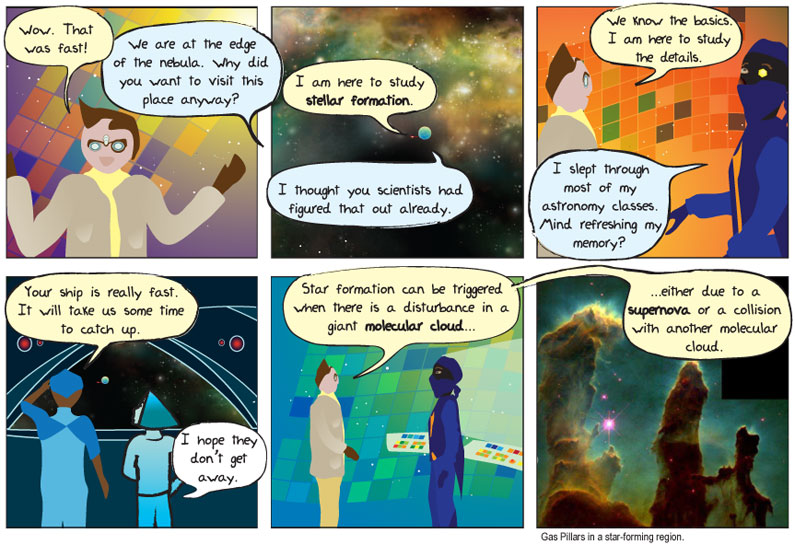 Panel 1.
Second Hijacker: Wow. That was fast.
Hijacker: We are at the edge of the nebula. Why did you want to visit this place anyway?

Panel 2.
Second Hijacker: I am here to study stellar formation.
Hijacker: I thought you scientists had figured that out already.

Panel 3.
Second Hijacker: We know the basics. I am here to study the details.
Hijacker: I slept through most of my astronomy classes. Mind refreshing my memory?

Panel 4.
Station Officer: Your ship is really fast. It will take us some time to catch up.
Alkina: I hope they don’t get away.

Panel 5.
Second Hijacker: Star formation can be triggered when there is a disturbance in a giant molecular cloud- either due to a supernova, or a collision with another molecular cloud.

Stellar (star) formation – the process by which stars are formed.

Molecular cloud – Also sometimes referred to as a stellar nursery if new stars are being formed within the cloud. Molecular clouds are giant regions of diffuse gases that can be as big as 326 light years (3.1 x 1015 km) across. They are composed mostly of Hydrogen and Helium, with a few other elements dispersed throughout. Internal gravitation in denser regions of the cloud can trigger the collapse of parts of the cloud, and when this happens, new stars can be formed.