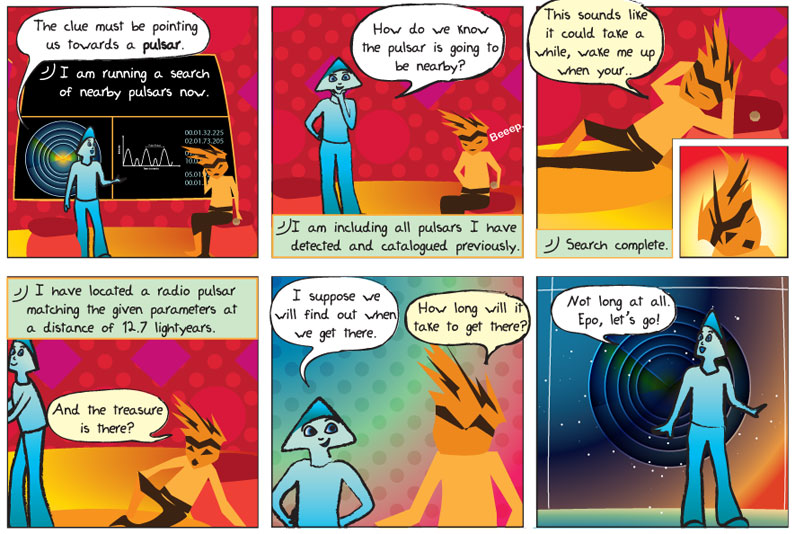 Panel 1
Alkina: The clue must be pointing us toward a pulsar.
Epo: I am running a search of nearby pulsars now.

Panel 2
Alkina: How do we know the pulsar is going to be nearby?
Epo: I am including all pulsars I have detected and catalogued previously.

Panel 3
Beggrin: This sound like this will take a while. Wake me up when your….
Epo: Search complete.

Panel 4
Epo: I have located a radio pulsar matching the given parameters at a distance of 12.7 lightyears.
Beggrin: And the treasure is there?

Panel 5
Alkina: I suppose we will find out when we get there.
Beggrin: How long will it take to get there?

Pulsar – A type of spinning star that emits a beam of light like a lighthouse. Since it points this bean at us some of the time, it looks to us like it is pulsing on and off, hence the name pulsar.

A radio pulsar is a pulsar which emits energy primarily at radio wavelengths of light. The period of a pulsar is a measure of how fast the star is spinning, and they have been measured to spin as slowly as once every 280 seconds, and as quickly as once every 1.4 milliseconds (that’s over 700 revolutions per second!). The first pulsar ever discovered was originally named Little Green Men-1 (LGM-1) because scientists thought that the regularity of the pulsing might be an indication of extraterrestrial life, however it was later determined to be a rotating neutron star. Pulsars have also been detected in optical, x-ray, and even gamma-ray light.

The Sounds of Pulsars – Find out what a pulsar sounds like.