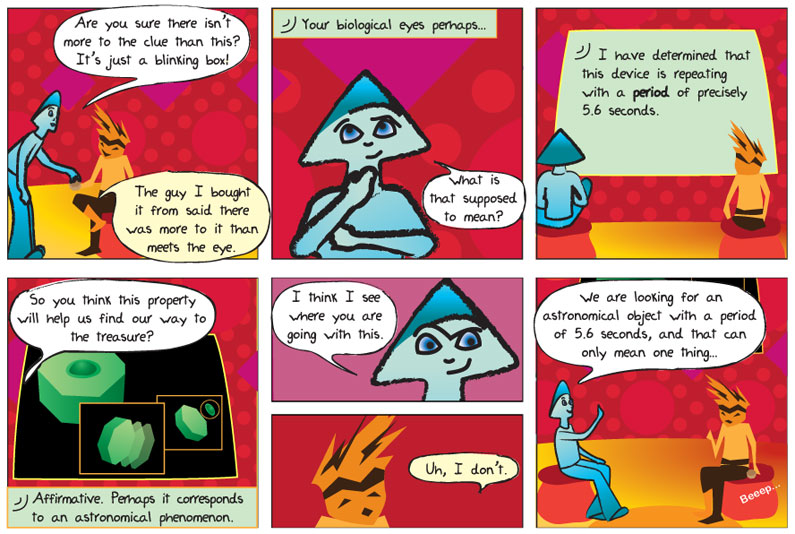 Panel 1
Alkina: Are you sure there isn’t more to the clue than this? It’s just a blinking box.
Beggrin: The guy I bought it from said there was more to it than meets the eye.

Panel 2
Epo: Your biological eyes, perhaps….
Alkina: What is that supposed to mean?

Panel 3
Epo: I have determined that this device is repeating with a period of precisely 5.6 seconds.

Panel 4
Alkina: So you think this property will help us find our way to the treasure?
Epo: Affirmative. Perhaps it corresponds to an astronomical phenomenon.

Panel 5
Alkina: I think I see where you are going with this.
Beggrin: Uh, I don’t.

Panel 6
Alkina: We are looking for an astronomical object with a period of 5.6 seconds, and that can only mean one thing…

Period – Periods apply to things that repeat, and measure how long it takes them to repeat. For instance, the period of the Earth to turn around its axis is 24 hours, while the period for the Earth to travel around the sun is 365 days.

Many astronomical phenomena have noticeable periodicities in the light emitted or in other properties. Planets like the Earth have spin periods around their own centers, as well as orbital periods around the stars which they are orbiting. Other objects, like comets, also have periods around the stars which they orbit. Even stars can have periods orbiting around objects like other stars, black holes, or even the centers of their galaxies. However, all of these periods are likely to be much longer than 5.6 seconds. For instance, it takes over 230 million years for the sun to revolve around the center of the Milky Way. Can you find an astronomical object that has a period as short as a few seconds or less?