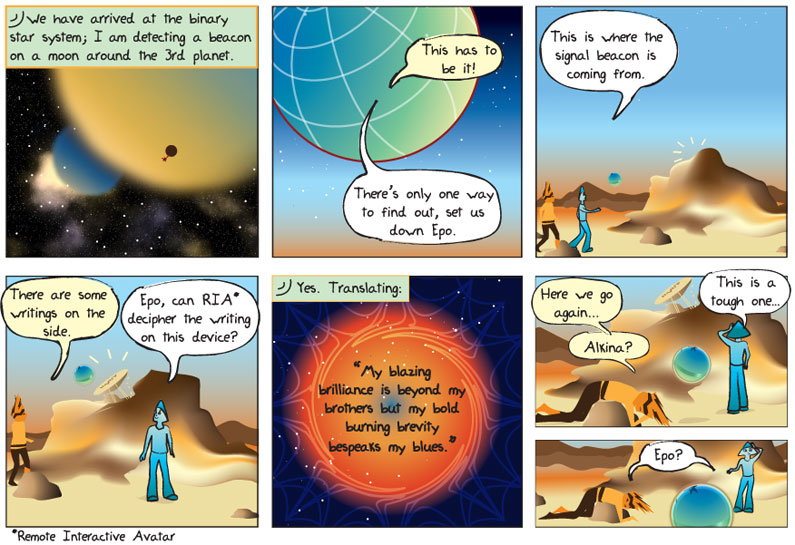 Panel 1
Epo: We have arrived at the binary star system; I am detecting a beacon on the moon around the third planet.

Panel 2
Beggrin: That has to be it!
Alkina: There’s only one way to find out, set us down, Epo.

Panel 3
Alkina: This is where the signal beacon is coming from.

Panel 4
Beggrin: There are some writings on the side.
Alkina: Epo, can RIA (Remote Interactive Avatar) decipher the writing on this device?

Panel 5
Epo: Yes. Translating.
“My blazing brilliance is beyond my brothers but my bold burning brevity bespeaks my blues.”

Panel 6
Beggrin: Here we go again… Alkina?
Alkina: This is a tough one.

Epo and Alkina must be getting close, because the clues are getting harder! This time, the object that they are searching for is something that is much brighter than other objects like it, and consequently only lives for a much shorter period. That might not seem like much of a clue, but if you have been paying close attention you might have noticed that all the objects our clues have been pointing us to have followed a pattern. First, we had a radio pulsar, followed by the microwave background, then a pair of infrared-emitting brown dwarfs and most recently an optical eclipsing binary star system. If you follow the pattern, it’s reasonable to assume that the next clue would be prominent in the ultraviolet band of the electromagnetic spectrum.