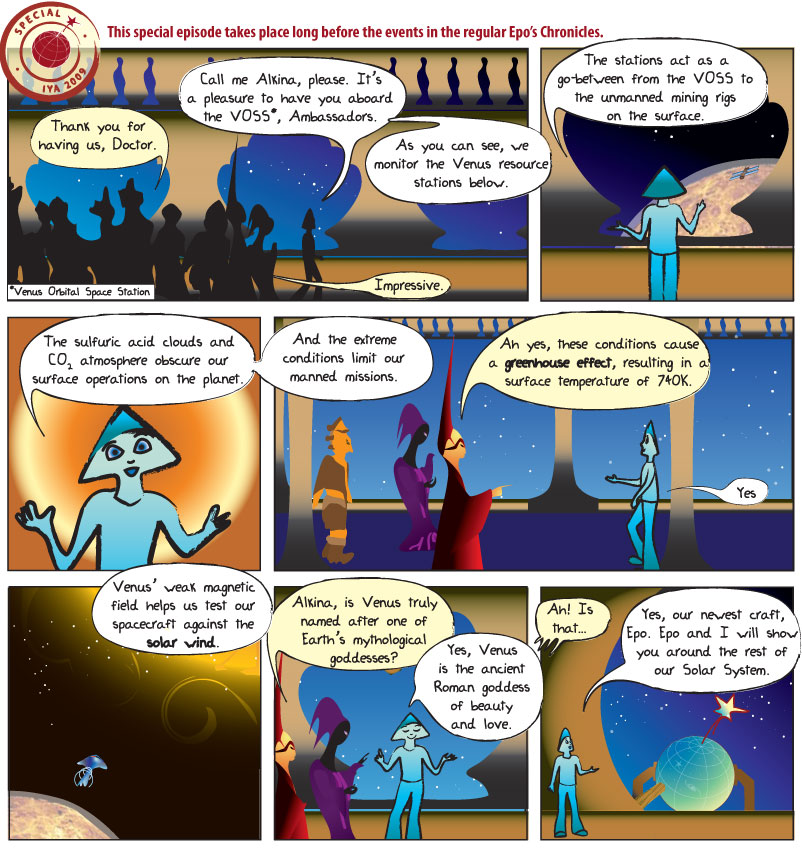 Panel 1.
Ambassador 1: Thank you for having us, Doctor
Alkina: Call me Alkina, please. It’s a pleasure to have you aboard the Venus Orbital Space Station or VOSS, Ambassadors. As you can see, we monitor the Venus resource stations below.
Ambassador 2: Impressive.

Panel 2.
Alkina: The stations act as a go-between from the VOSS to the unmanned mining rigs on the surface.

Panel 3.
Alkina: The sulfuric acid clouds and CO2 atmosphere obscure our surface operations on the planet. And the extreme conditions limit our manned missions.

Panel 4.
Ambassador 2: Ah yes, these conditions cause a greenhouse effect, resulting in a surface temperature of 740K.
Alkina: Yes.

Panel 6.
Ambassador 3: Alkina, is Venus truly named after one of Earth’s mythological goddesses?
Alkina: Yes, Venus is the ancient Roman goddess of beauty and love.

Panel 7.
All Ambassadors: Ah! Is that…
Alkina: Yes, our newest craft, Epo. Epo and I will show you around the rest of our Solar System.

Solar wind – is the term given to the stream of charged particles that are ejected from the Sun’s atmosphere. One of the effects of the interaction of solar wind and the Earth’s atmosphere is a creation of beautiful light patterns in sky known as auroras.

Venus’ atmospheric pressure is 90 times greater than Earth’s and is composed primarily of carbon dioxide (96.5%). This has caused a greenhouse effect, so much so, that it increases the planet’s surface temperature to 740K. Venus’ clouds are mostly composed of sulfuric acid. These conditions make Venus hostile to human life.

It takes Venus almost 225 days to orbit the sun, but the planet spins so slowly on its axis that it takes over 240 earth days for one Venus day to complete. In other words, one day on Venus lasts for 5,832 hours. Also, Venus also spins in retrograde, meaning opposite to the direction it travels as it orbits the Sun. This means that on Venus the Sun rises in the west and sets in the east.

NASA’s Venus page – Everything you ever wanted to know about Venus.

The Greenhouse Effect and Greenhouse Gasses – What influence does the greenhouse effect have on our planet?

Auroras: What makes them happen? – Find out how solar wind causes the Earth’s auroras.