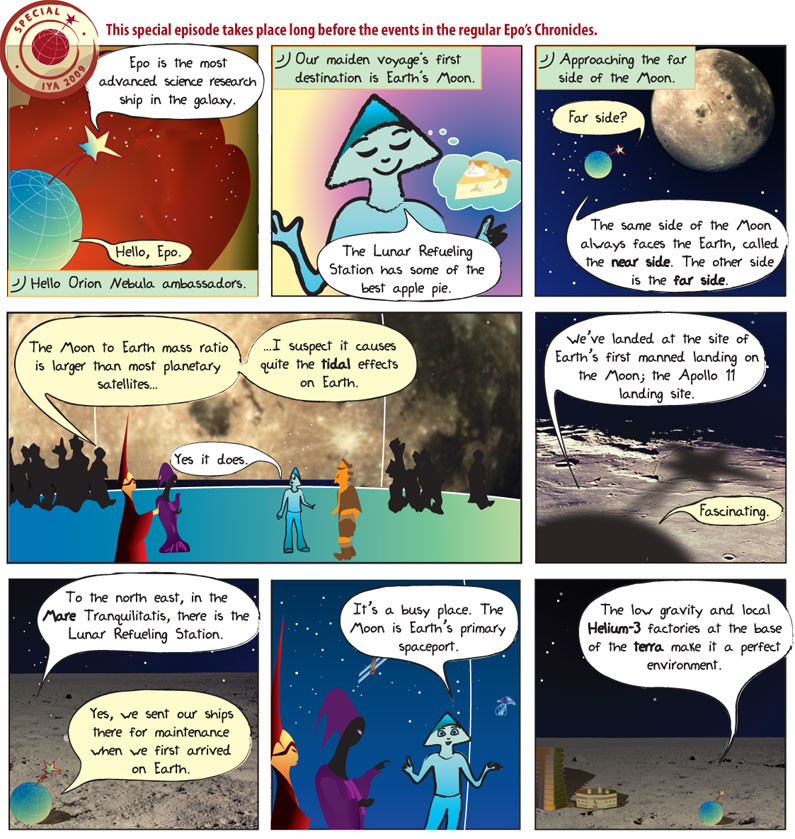 Panel 2.
Epo: Our maiden voyage’s first
destination is Earth’s Moon.
Alkina: The Lunar Refueling Station has some of the best apple pie.

Panel 3.
Epo: Approaching the far
side of the Moon.
Ambassador: Far side?
Alkina: The same side of the Moon always faces the Earth, called the near side. The other side is the far side.

Panel 4.
Ambassador: The Moon to Earth mass ratio is larger than most planetary satellites. I suspect it causes quite the tidal effects on Earth.
Alkina: Yes it does.

Panel 6.
Alkina: To the north east, in the Mare Tranquilitatis, there is the Lunar Refueling Station.
Ambassador: Yes, we sent our ships there for maintenance when we first arrived on Earth.

Panel 8.
Alkina: The low gravity and local Helium-3 factories at the base of the terra make it a perfect environment.

Apollo – NASA’s Apollo program included the first manned mission to the Moon and ran from 1963 to 1972.

Helium-3 – He-3, which is used in nuclear fusion research, is rare on Earth. He-3 has 2 protons and 1 neutron. Some scientists have speculated that it could be used as a source of fuel for future spaceships.

Mare – Maria is latin for “seas”, mare is singular. The dark regions that you can see on the Moon are the maria.

Near Side – The side of the Moon that always faces toward the earth. Features on this side are named mainly after the European astronomers who first observed them with telescopes.

Far Side – The side of the Moon that always faces away from the earth. Features on this side are named mainly after Russian scientists since they were first explored by Russian probes.

Light Side – The part of the Moon the sun is currently shining on. The side of the Moon that receives sunlight changes as the Moon orbits around the earth.

Dark Side – The part of the Moon the sun is NOT currently shining on.

Tides – Tides are the changes in sea level due to gravitational forces exerted primarily by the Moon, but also in part by the Sun.

Terrae – Terrae is latin for “lands”, terra is singular. The lighter regions on the Moon that you can see, also called the highlands, are the terrae.

Orbit and Rotation of the Moon: The Moon orbits Earth every 27.3 days (about 1 month) with roughly the same side always facing the planet. This kind of rotation is called synchronous. A synchronous orbit means that the object takes as long to rotate on its axis as it does to revolve around the object it orbits.

Tides: The gravitational pull of the Moon on the Earth is the primary cause of the oceans’ tides, though the Sun’s gravity also plays a part. The Moon’s pull causes the Earth’s oceans to bulge so that throughout the day the water levels of the oceans change.

The new Moon phase is when no sunlight is falling on the near side of the Moon.

A waxing crescent Moon is observed when less than 50% of the Moon is illuminated. Waxing means that the amount of sunlight striking the near side of the Moon is increasing. Waxing literally means “to grow”.

The first quarter Moon is observed when it is waxing and it is exactly 50% illuminated.

The waxing gibbous phase is observed next, where more than 50%, but less than 100% of the near side can be seen from a location on Earth.

When 100% of the near side is illuminated, a full Moon is observed.

Then the amount of sunlight that strikes the near side begins to diminish and goes through the waning phases; waning gibbous, last quarter, waning crescent and finally back to new Moon.

Surface Features: The surface of the Moon is covered with regolith, which is fine dust, sand and rock created from the impacts of asteroids and comets. It can be several meters thick, and below the regolith is a layer of megaregolith which can be kilometers in thickness and much more dense.

The maria are cooled basalt lava basins. Most of the maria were created from large impacts with asteroids or comets which allow lava to flow to the surface. Maria comprise over 30% of the Moon’s surface on the near side and less than 3% on the far side.

Because the Moon lacks an atmosphere, there is no weather to erode the craters. Changes to the Moon’s surface occur due to new asteroid or comet impacts.

The South Pole-Aitken basin is one of the largest known craters in the solar system, and is over 10 km deep and 2,200 km in diameter. Nearly the entire western half of the United States, from Colorado to California, Arizona to Idaho, could fit within the crater.

Human Exploration: The Moon has the distinction of being the only other body in the solar system, other than Earth, that humanity has set foot on. On July 21st, 1969, Neil Armstrong became the first human to walk on the Moon during the Apollo 11 mission. There were 5 more Apollo missions after Apollo 11 that landed humans on the Moon.

NASA Exploration – News and information about NASA’s planned return to the Moon.

IYA Moon Discovery Guide – Learn about the Moon this month and have a blast with the Spotting Craters activity.