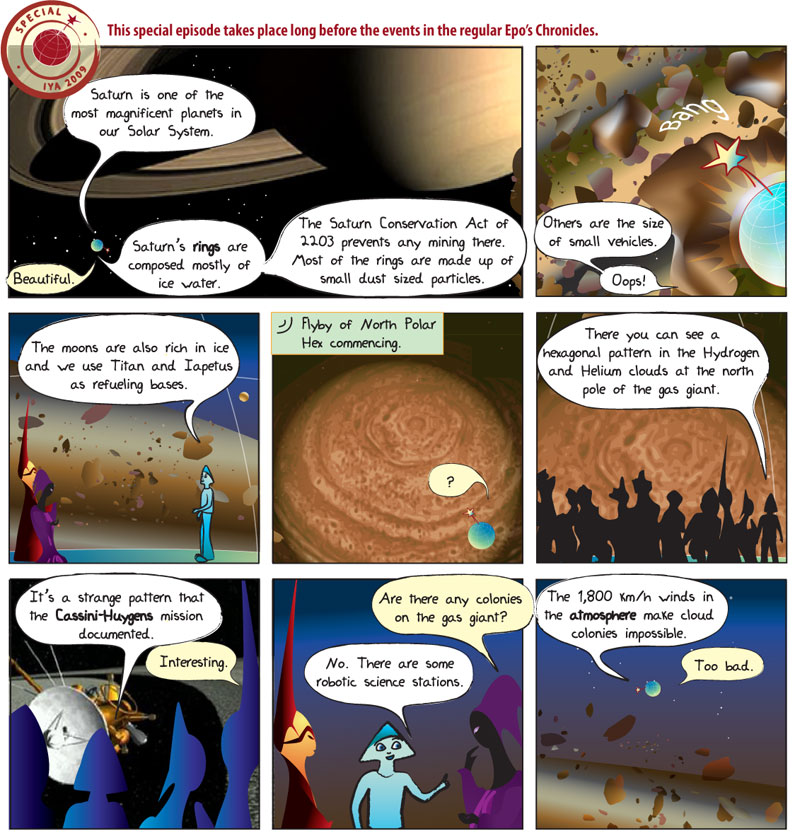 Panel 1.
Alkina: Saturn is one of the most magnificient planets in our Solar Sytem.
Ambassador: Beautiful!
Alkina: Saturn’s rings are composed mostly of water ice. The Saturn Conservation Act of 2203 prevents any mining there. Most of the rings are made up of small dust sized particles.

Panel 2.
Alkina: Others are the size of small vehicles.

Panel 3.
Alkina: The moons are also rich in ice and we use Titan and Iapetus as refueling bases.

Panel 5.
Alkina: There you can see a hexagonal pattern in the Hydrogen and Helium clouds at the north pole of the gas giant.

Panel 7.
Ambassador: Are there any colonies on the gas giant?
Alkina: No. There are some robotic science stations.

Cassini-Huygens is a joint exploration mission between the European Space Agency (ESA) and NASA, which launched the Cassini spacecraft in 1997. It took Cassini almost seven years to reach Saturn and in 2005 it successfully landed the Huygens probe on Titan. The mission continues to produce amazing images and data of Saturn and its system.

Titan, Saturn’s largest moon, is composed of about half water ice, the other half being rock and minerals. Titan also has a very thick nitrogen atmosphere which is methane-rich and resembles Earth’s atmosphere billions of years ago.

Rings of Saturn: One of the most strikingly beautiful features of our Solar System is Saturn’s rings. The rings can be seen even with strong binoculars. They are composed of small particles (ranging in size from microscopic dust to the size of large refrigerators) of water, tholin (methane, ethane, etc.), and carbon.

The rings are over 280,000 km in diameter yet only 1 km thick. When Galileo first looked at Saturn with his telescope he thought he saw lobes rather than rings. This was due to his telescope not being powerful enough to resolve the rings clearly.

Atmosphere: Saturn’s atmosphere is composed mostly of Hydrogen (H) and Helium (He) with trace amounts of other elements such as methane. Saturn appears “striped” with colored bands of clouds, though not as pronounced as Jupiter’s bands.