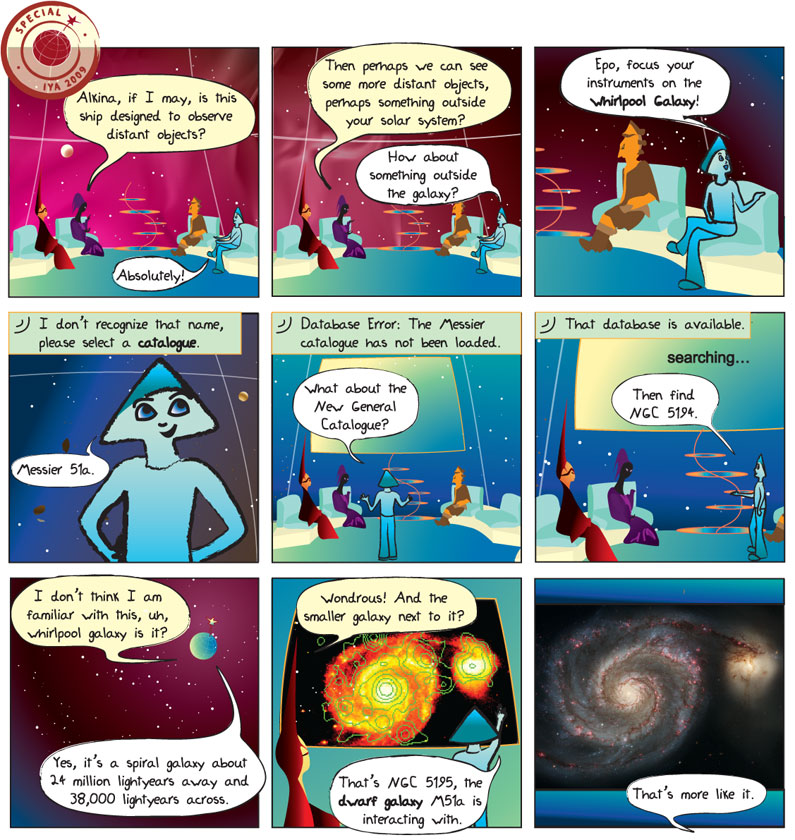 Panel 1.
Ambassador: Alkina, if I may, is this ship designed to observe distant objects?
Alkina: Absolutely!

Panel 3.
Alkina: Epo, focus your instruments on the Whirlpool Galaxy!

Panel 5.
Epo: Database Error: The Messier catalogue has not been loaded.
Alkina: What about the New General Catalogue?

Panel 7.
Ambassador: I don’t think I am familiar with this, uh, whirlpool galaxy is it?
Alkina: Yes, it’s a spiral galaxy about 24 million lightyears away and 38,000 lightyears across.

Panel 8.
Ambassador: Wondrous! And the smaller galaxy next to it?
Alkina: That’s NGC 5195, the dwarf galaxy M51a is interacting with.

Dwarf Galaxy – A galaxy that contains somewhere around several billion stars, as opposed to the hundreds of billions of stars found in a galaxy like our own.

The famous French astronomer and comet hunter Charles Messier published the first edition of his catalogue in 1771 with 43 objects. It would eventually grow to include 103 objects by the time Messier had finished with it. Today it includes a total of 110 objects, including objects that Messier noticed, but never added to his list. Messier objects are usually abbreviated with the letter “M” followed by the object’s number.

The New General Catalogue was started in the 1880s using observations by astronomer William Herschel (famous for his discovery of Neptune). This catalogue has grown to contain nearly 8,000 astronomical objects. Unlike some catalogues, the NGC is not specific to a certain type of object (like galaxies or nebulas) but contains many types of objects.

Discovered by Charles Messier in 1773, the Whirlpool Galaxy, also known as M51a or NGC 5194, is one of the most striking examples of a grand spiral formation. Its small companion galaxy is called M51b or NGC 5195. A collision between the two galaxies roughly 600 million years ago gave M51a a more pronounced spiral structure. The Whirlpool Galaxy is estimated to be about half the size of our own galaxy at 38,000 lightyears across and lies about 24 million lightyears away.