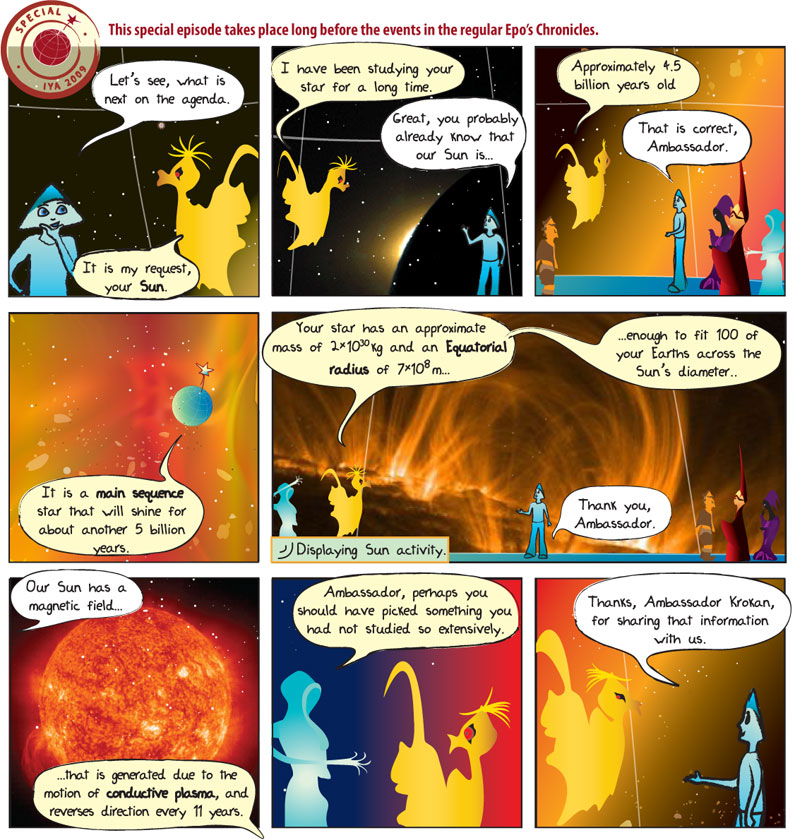 Panel 1.
Alkina: Let’s see, what is next on the agenda.
Ambassador Krokan: It is my request, your Sun.

Panel 2.
Ambassador Krokan: I have been studying your star for a long time.
Alkina: Great, you probably already know that our Sun is…

Panel 4.
Ambassador Krokan: It is a main sequence star that will shine for about another 5 billion years.

Panel 5.
Ambassador Krokan: Your star has an approximate mass of 2 x 1030kg and an Equatorial radius of 7 x 108m.
Alkina: Thank you, Ambassador.

Panel 6.
Alkina: Our Sun has a magnetic field…
Ambassador Krokan: …that is generated due to the motion of conductive plasma, and reverses direction every 11 years.

Panel 7.
Ambassador 5: Ambassador, perhaps you should have picked something you had not studied so extensively.

Panel 8.
Alkina: Thanks, Ambassador Krokan, for sharing that information with us.

Main sequence – is the name given to a region on a graph, known as the Hertzsprung–Russell (HR) diagram, of stellar color versus brightness. While on the main sequence, which runs from hotter and brighter stars (upper left) to cooler and dimmer ones (lower right), a star generates energy by nuclear fusion in its core. In the Sun these fusion reactions convert hydrogen to helium.

Equatorial radius – the radius of the Sun measured from its center to its equator. This is not the same distance as measuring from the center to the pole. Since the Sun is spinning, it is slightly flattened, causing the equator to bulge slightly outward and the poles to move slightly inward. The Sun’s shape is sort of like the shape you get when you hold a spherical balloon on opposite sides and then squeeze it slightly inward.

Conductive plasma – Plasma is a gas in which the electrons have been stripped off the atoms. The resulting positively charged particles are called ions, and they are just atoms that have lost some electrons. Plasma also contains negatively charged particles, which are the electrons that have been stripped away. The process of stripping electrons from atoms is called ionization. Ionization happens very easily in stars because they are so hot. The temperature variations within stars, along with their rotation, causes the plasma to move. Since the plasma contains charged particles, under the right conditions this motion can create an electric current. The current, in turn, gives the star a magnetic field.

Our Sun is about 4.5 billion years old and will last about another 5 billion years. It is a medium sized star. Its energy, and subsequently the heat and light energy we receive from it, comes from the nuclear process know as fusion in which lighter elements are combined to make heavier ones. In the Sun, hydrogen atoms are fused together to make helium atoms. When the Sun runs out of elements to fuse together, it will turn into a white dwarf star. See the link below to find out the details of the evolution of the Sun.

The dark spots you see in the picture of the Sun are called sunspots. Sunspots appear dark because they are cooler than the surrounding areas. They are places where strong magnetic fields poke out through the Sun’s surface. Sunspots are related to strong solar flares (ejection of hot plasma from the surface into space). These flares can sometimes cause problems here on Earth.

Because it is our primary source of energy, the Sun has played a significant part in our cultural history and has been worshipped as a god by some cultures.

Life of the Sun – Learn how the Sun will evolve over its lifetime.

Sunspots – Learn how the Sun has been viewed through ancient cultures and about current research being done to increase our understanding of the Sun and sunspots.