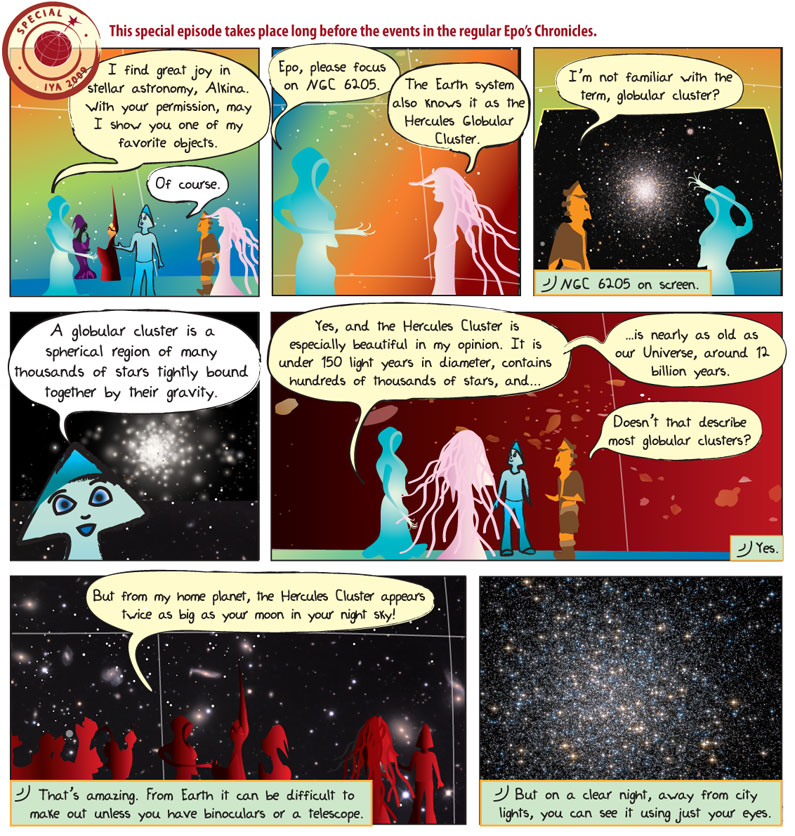 Panel 1.
Ambassador 1: I find great joy in stellar astronomy, Alkina. With your permission, may I show you one of my favorite objects.
Alkina: Of course.

Panel 4.
Alkina: A globular cluster is a spherical region of many thousands of stars tightly bound together by their gravity.

Panel 5.
Ambassador 1: Yes, and the Hercules Cluster is especially beautiful in my opinion. It is under 150 light years in diameter, contains hundreds of thousands of stars, and is nearly as old as our Universe, around 12 billion years.
Ambassador 3: Doesn’t that describe most globular clusters?
Epo: Yes.

Panel 6.
Ambassador 1: But from my home planet, the Hercules Cluster appears twice as big as your moon in your night sky!
Epo: That’s amazing. From Earth it can be difficult to make out unless you have binoculars or a telescope.

Panel 7.
Epo: But on a clear night, away from city lights, you can see it using just your eyes.

The Hercules Globular Cluster is in the constellation of Hercules and has a close neighboring globular cluster, M92 which is fainter than M13.

The Hercules Globular Cluster was discovered in 1714 by Edmond Halley and entered into the Messier catalog in 1764.

When globular clusters were first observed, in the late 1600s and 1700s, the telescopes used were not powerful enough to see individual stars and so they were called nebulae because they appeared cloud-like. At that time, astronomers could not distinguish between star clusters like M13, actual nebulae (interstellar clouds of dust, gas and plasma), and even galaxies!

Most globular clusters exist in the halo of galaxies, and the Hercules Globular Cluster is in the halo of the Milky Way. The halo is a roughly spherical region of space around the dominantly visible part of a galaxy. Halos, unlike the main body of the galaxy, are largely void of gas and dust, and contain older population stars.

Globular clusters are some of the oldest objects in the universe. Because of this, they contain mostly old stars that generally have an extremely small amount of elements heavier than hydrogen and helium. Exactly how globular clusters formed is still uncertain, with new observations bringing us closer to the answer.