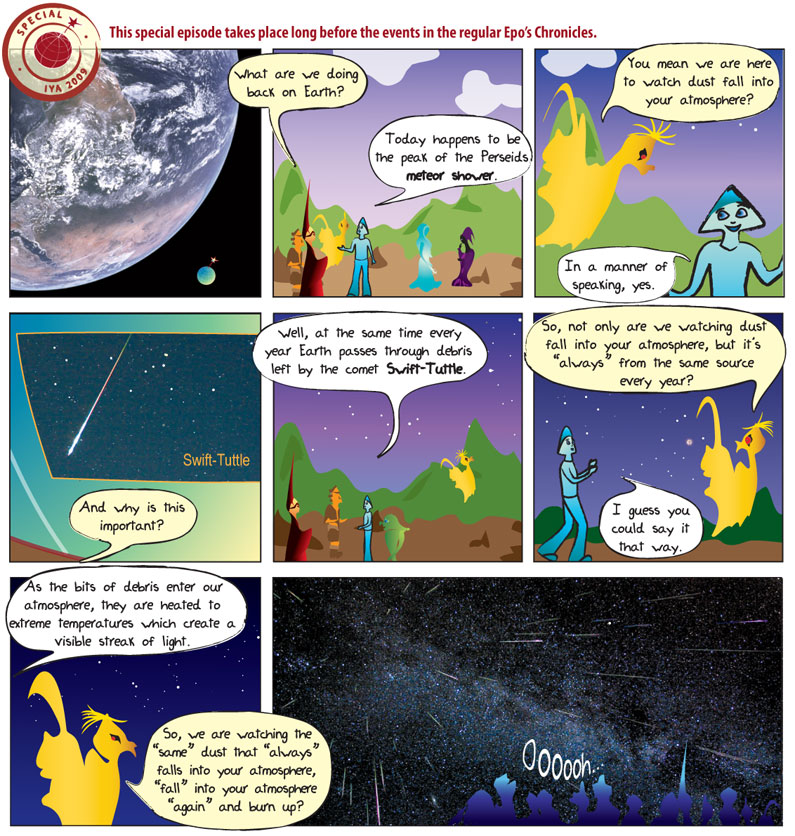 Panel 2.
Ambassador: What are we doing back on Earth?
Alkina: Today happens to be the peak of the Perseids meteor shower.

Panel 3.
Ambassador: You mean we are here to watch dust fall into your atmosphere?
Alkina: In a manner of speaking, yes.

Panel 4.
Ambassador: And why is this important?

Panel 5.
Alkina: Well, at the same time every year Earth passes through debris left by the comet Swift-Tuttle.

Panel 6.
Ambassador: So, not only are we watching dust fall into your atmosphere, but it’s “always” from the same source every year?
Alkina: I guess you could say it that way.

Meteor – A meteor is the flash of light we see when a particle or chunk of solid matter falls into our atmosphere and disintegrates.

Meteor Shower – When the Earth passes through a cloud of dust, we see large numbers of meteors in a relatively short time. This is called a meteor shower. During its peak, observers might notice one or two meteors a minute from the Perseids.

Swift-Tuttle – A near-Earth comet independently discovered in 1862 by American astronomers and comet hunters Lewis Swift and Horace Tuttle. It is the source of the Perseid meteors.

As the Earth orbits around the Sun, it regularly passes through the debris trail from the comet Swift-Tuttle. This leads to tiny particles, the size of grains of sand, entering our atmosphere at speeds around 132,000 miles per hour. The disintegration of these particles produces brilliant flashes of light which we call meteors. Sometimes we also refer to these as “shooting stars” but of course, they aren’t stars at all. The actual pieces of interplanetary dust and debris are referred to as meteoroids, and if they survive the impact and make it to the Earth’s surface we call them meteorites.

Active Dates: Mid-July to mid-August.
Meteor Rates: from 50-200 an hour at peak.

More information:
History: The Perseids meteor shower has been observed by astronomers for about 2000 years. In medieval Europe they were referred to as the “tears of St. Lawrence” since they coincided with the August 10th festival in his name. Discovery of the comet responsible for the meteor shower dates back to 1862.

Swift-Tuttle: The comet, whose debris trail is responsible for the Perseids meteor shower. It has an orbital period of about 133 years, and at its closest approach to the Sun gets just a little closer than Earth at 0.96 AU. Its orbit is highly elongated, reaching a distance from the sun of about 51 AU. The comet’s most recent passage near the Sun was in December of 1992, so we won’t be seeing it nearby again until July of 2126.

Perseus: The constellation named for the mythical Greek hero who killed Medusa and claimed Andromeda. This constellation lies in the northern hemisphere and is the namesake of the Perseids meteor shower. Perseus is the radiant of the meteor shower, meaning that it’s the point in the sky from which the meteors seem to emanate.

IYA Discovery Guide – August’s theme is Rocks and Ice in the Solar System. Get ready for the Perseid meteor shower this month and find out just what a “shooting star” is.