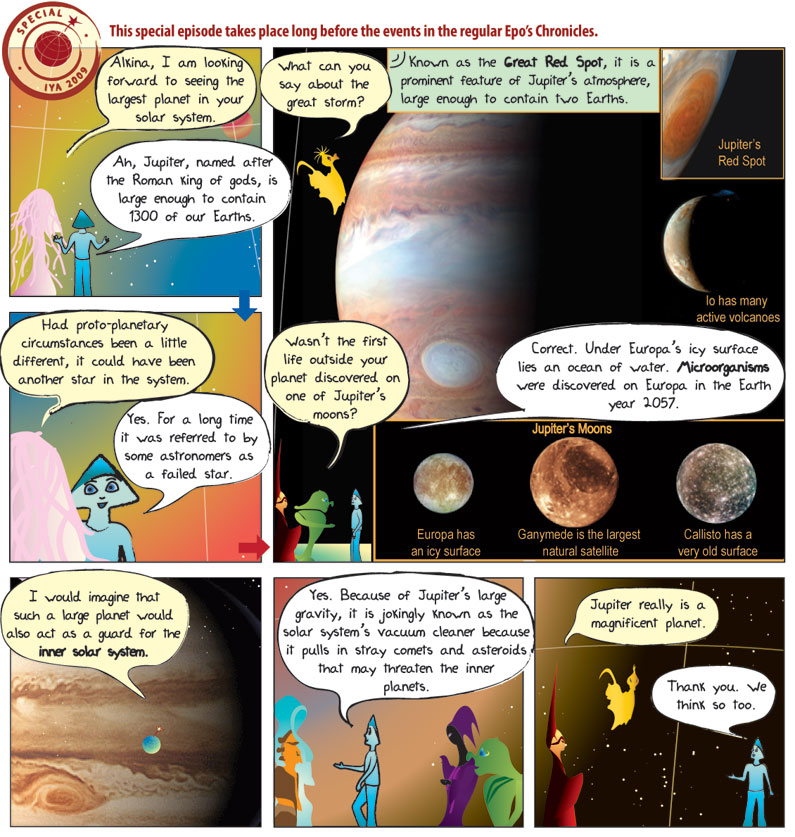 Panel 1.
Ambassador: Alkina, I am looking forward to seeing the largest planet in your solar system.
Alkina: Ah, Jupiter, named after the Roman king of gods, is large enough to contain 1300 of our Earths.

Panel 2.
Ambassador: Had proto-planetary circumstances been a little different, it could have been another star in the system.
Alkina: Yes. For a long time it was referred to by some astronomers as a failed star.

Panel 3.
Ambassador: What can you say about the great storm?
Epo: Known as the Great Red Spot, it is a prominent feature of Jupiter’s atmosphere, large enough to contain two Earths.
Ambassador: Wasn’t the first life outside your planet discovered on one of Jupiter’s moons?
Alkina: Correct. Under Europa’s icy surface lies an ocean of water. Microorganisms were discovered on Europa in the Earth year 2057.

Panel 4.
Ambassador: I would imagine that such a large planet would also act as a guard for the inner solar system.

Panel 5.
Alkina: Yes. Because of Jupiter’s large gravity, it is jokingly known as the solar system’s vacuum cleaner because it pulls in stray comets and asteroids that may threaten the inner planets.

Panel 6.
Ambassador: Jupiter really is a magnificent planet.
Alkina: Thank you. We think so too.

Great Red Spot – is a giant hurricane that has existed on Jupiter for at least 300 years. It is not known whether it will ever disappear.

Microorganism – As the name implies, a microorganism is an organism that is microscopic in size, usually too small to be seen with unaided human eye.

Inner solar system – Is the region of space that is smaller than the radius of Jupiter’s orbit around the sun. It contains the asteroid belt as well as the terrestrial planets, Mercury, Venus, Earth and Mars.

Jupiter is the largest planet in our solar system. It is a gas giant composed of about 80% hydrogen, 20% helium with a very tiny amount of other elements. Its chemical composition is very similar to our Sun. Because of its large size, Jupiter is the third brightest object that can be seen in the night sky, behind the Moon and Venus. Jupiter has a faint planetary ring, which unlike Saturn’s rings, is made up of dust particles.

Jupiter has at least 63 natural satellites, the first four (Io, Europa, Ganymede and Callisto; also known as the Galilean moons) were discovered in 1610 by Galileo after he pointed a telescope he had built, towards the planet.

Jupiter’s large mass, and therefore its gravity, affects the inner planets just as it affects comets and asteroids. In fact, in time Jupiter would toss all the planets out of the solar system, with just itself and the Sun left in a binary system. However, the timescale for this to happen is quite long, longer than the lifetime of the Sun.

Ganymede, one of Jupiter’s moons, is also the largest natural satellite in our solar system with a diameter greater than that of Mercury.

The fact that Callisto has a very old surface is evidenced by the many impact craters on its surface. Those craters were most likely formed when the solar system was still very young and had a lot of debris in space that had not been cleared away.

IYA Discovery Guide – September’s theme is Planets and Moons. You can see Jupiter in the sky right now and this guide will show you how.