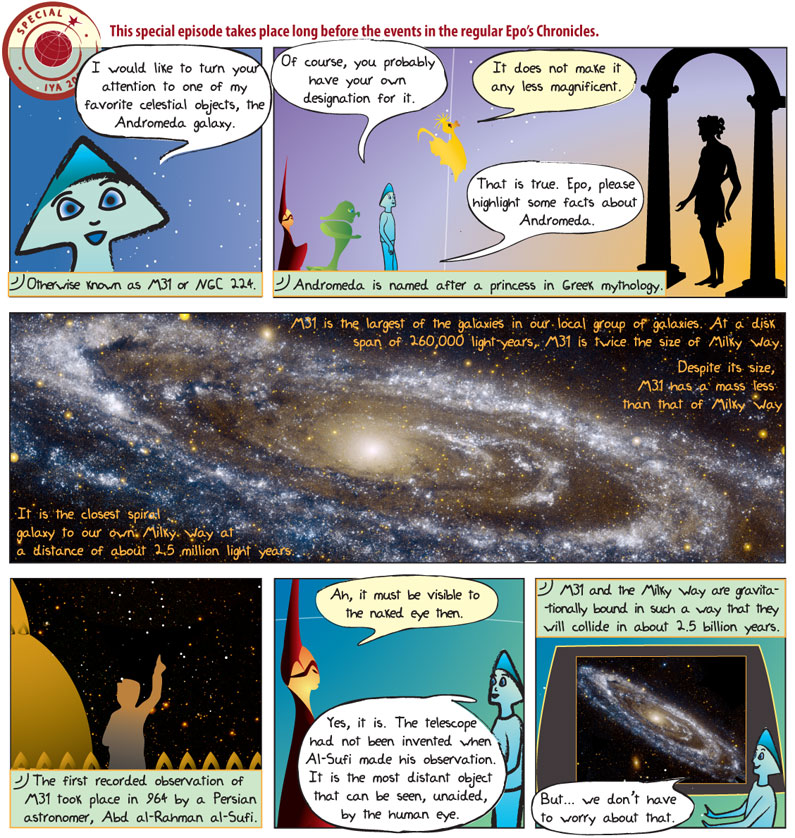 Panel 1.
Alkina: I would like to turn your attention to one of my favorite celestial objects, the Andromeda galaxy.
Epo: Otherwise known as M31 or NGC 224.

Panel 2.
Alkina: Of course, you probably have your own designation for it.
Ambassador 1: It does not make it any less magnificent.
Alkina: That is true. Epo, please highlight some facts about Andromeda.
Epo: Andromeda is named after a princess in Greek mythology.

Panel 3.
Epo: M31 is the largest of the galaxies in our local group of galaxies. At a disk span of 260,000 light-years, M31 is twice the size of Milky Way. Despite its size, M31 has a mass less than that of Milky Way. It is the closest spiral
galaxy to our own Milky Way at a distance of about 2.5 million light years.

Panel 5.
Ambassador 2: Ah, it must be visible to the naked eye then.
Alkina: Yes, it is. The telescope had not been invented when Al-Sufi made his observation. It is the most distant object that can be seen, unaided, by the human eye.

Panel 6.
Epo: M31 and the Milky Way are gravita-tionally bound in such a way that they will collide in about 2.5 billion years.
Alkina: But… we don’t have to worry about that.

When the Andromeda Galaxy was first discovered, it was not known that there are other galaxies besides our own Milky Way. In fact, the term galaxy was not used as it is now, and no galaxies at all were known, not even the Milky Way.

Prior to the 1920s there was the Universe, and our “galaxy” was generally thought to comprise the whole of it. So, for a long time, Andromeda was thought to be part of our own galaxy, sometimes as just a nebula and sometimes as a region where solar systems were being born. Andromeda is a galaxy in its own right, solar systems and stars do exist within it.

It was not until the early 1900s when the possibility of Andromeda’s location being outside our galaxy started being discussed among astronomers. The first evidence came from study of novae, that were observed to be 10 times fainter than the ones discovered in our own galaxy. The debate was finally settled by Edwin Hubble in 1925 based on observations of Cepheid variable stars located in the Andromeda Galaxy.

IYA Discovery Guide – October’s theme is What is the Fate of the Universe? Find out about how it all started, where we are going, and what will happen when the Andromeda Galaxy collides with the Milky Way.

Andromeda Litho – was created by GALEX Space Telescope Education and Public Outreach to highlight how it is studying our nearest galactic neighbor.

Andromeda, the island universe – Astronomy Picture of the Day highlights the Andromeda Galaxy.

Andromeda in the news – News and pictures related to Andromeda.