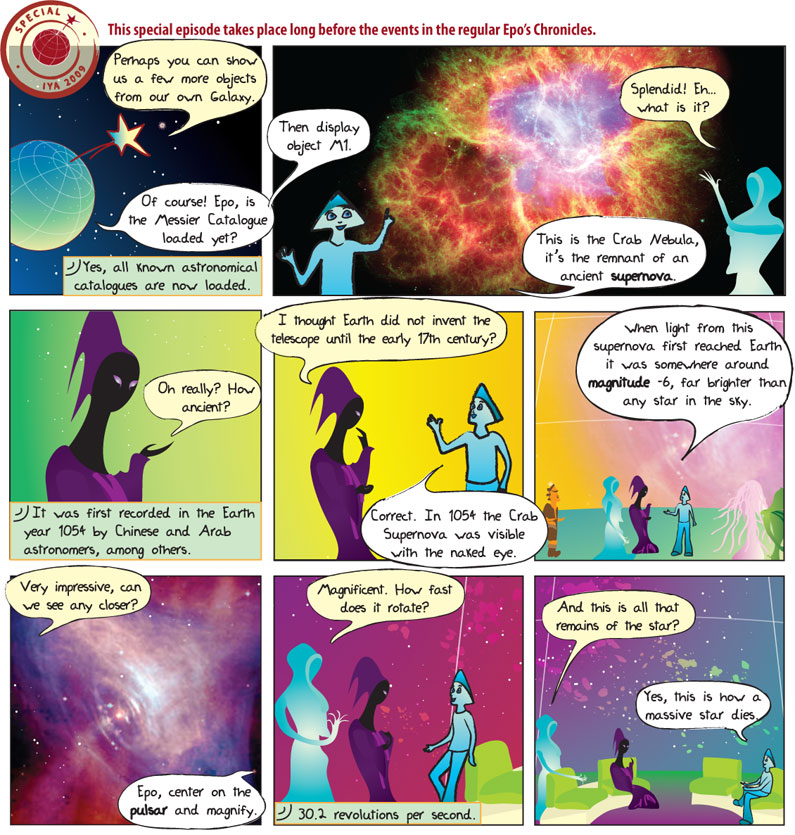 Panel 1.
Ambassador 1: Perhaps you can show us a few more objects from our own Galaxy.
Alkina: Of course! Epo, is the Messier Catalogue loaded yet?
Epo: Yes, all known astronomical catalogues are now loaded.

Panel 2.
Alkina: Then display object M1.
Ambassador 1: Splendid! Eh… what is it?
Alkina: This is the Crab Nebula, it’s the remnant of an ancient supernova.

Panel 3.
Ambassador 2: Oh really? How ancient?
Epo: It was first recorded in the Earth year 1054 by Chinese and Arab astronomers, among others.

Panel 4.
Ambassador 2: I thought Earth did not invent the telescope until the early 17th century?
Alkina: Correct. In 1054 the Crab Supernova was visible with the naked eye.

Panel 5.
Alkina: When light from this supernova first reached Earth it was somewhere around magnitude -6, far brighter than any star in the sky.

Panel 6.
Ambassador 1: Very impressive, can we see any closer?
Alkina: Epo, center on the pulsar and magnify.

Panel 7.
Ambassador 1: Magnificent. How fast does it rotate?
Epo: 30.2 revolutions per second.

Panel 8.
Ambassador 1: And this is all that remains of the star?
Alkina: Yes, this is how a massive star dies.

Pulsar – is a spinning neutron star with a very strong magnetic field, which emits a beam of electromagnetic radiation. This makes the star appear to pulse as the electromagnetic beam moves in and out of our line of sight, similar to how a lighthouse works.

The Crab Nebula is a cloud of expanding gasses set in motion when a star went supernova. In the year 1054, when light from the supernova first reached Earth, this object was very bright. Records from that time indicate that it was visible for 23 days during daylight and 653 days in the night sky. At that time, the Crab supernova was around a magnitude of -6. Today, the gasses have expanded and cooled, and the nebula has a magnitude of 8.4, no longer visible to the naked eye. Charles Messier first noticed this object in 1758 while searching for Halley’s Comet, and its discovery served as his impetus to create his now famous catalogue. This is why the Crab Nebula bears the distinction of being named M1.

Apparent magnitude – Wikipedia article on magnitude with list of various objects and their magnitudes.