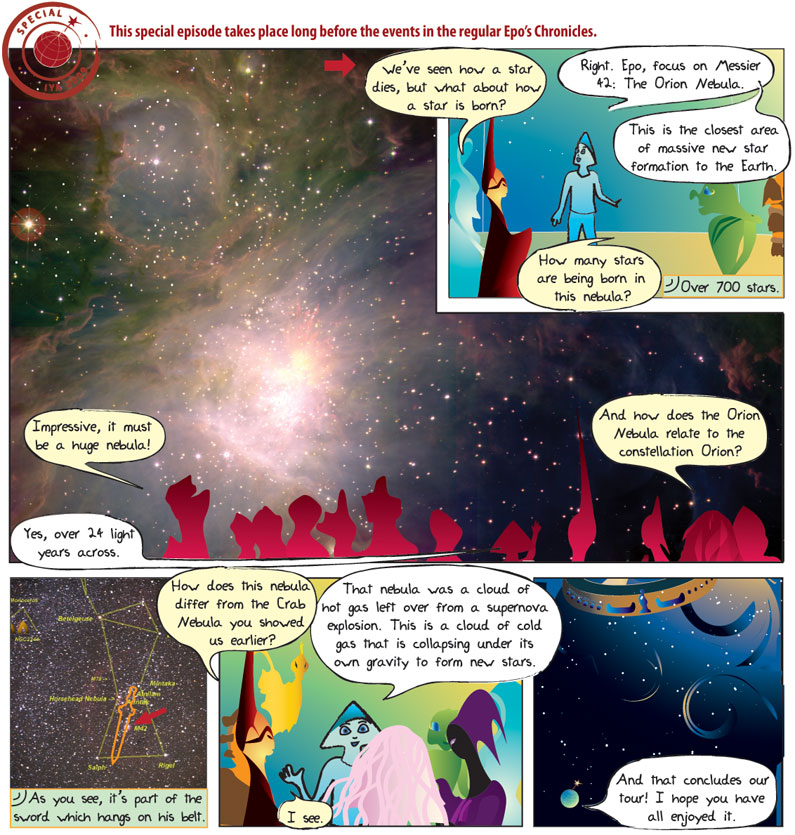 Panel 1.
Ambassador 1: We’ve seen how a star dies, but what about how a star is born?
Alkina: Right. Epo, focus on Messier 42: The Orion Nebula. This is the closest area of massive new star formation to the Earth.
Ambassador 2: How many stars are being born in this nebula?
Epo: Over 700 stars.

Panel 2.
Ambassador 1: Impressive, it must be a huge nebula!
Alkina: Yes, over 24 light years across.
Ambassador 2: And how does the Orion Nebula relate to the constellation Orion?

Panel 3.
Epo: As you see, it’s part of the sword which hangs on his belt.

Panel 4.
Ambassador 1: How does this nebula differ from the Crab Nebula you showed us earlier?
Alkina: That nebula was a cloud of hot gas left over from a supernova explosion. This is a cloud of cold gas that is collapsing under its own gravity to form new stars.

Panel 5.
Alkina: And that concludes our tour! I hope you have all enjoyed it.

The Orion Nebula is very important to astronomers because it is the closest region of new star formation to Earth. Much of what scientists know about how stars are formed has been learned through careful observation of this nebula. The Orion Nebula is also the first place that scientists have observed protoplanetary disks. These young systems are currently in the process of becoming new solar systems.