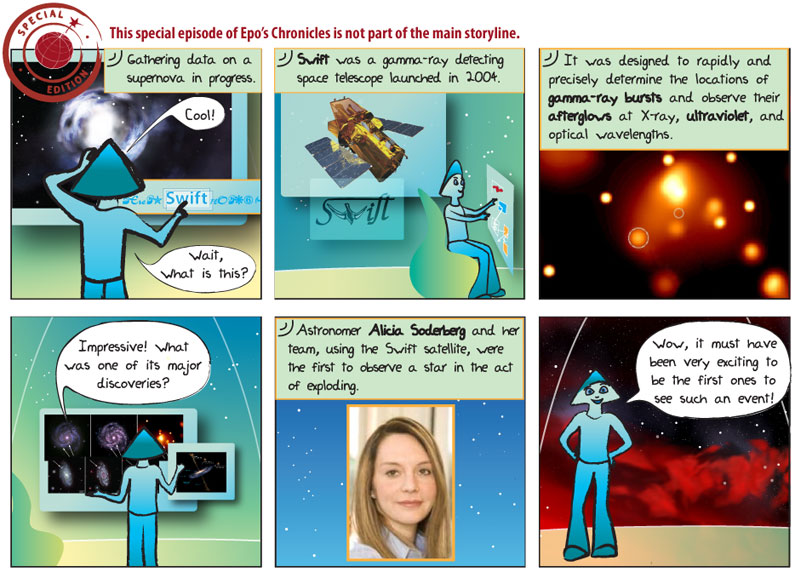 Panel 1.
Epo: Gathering data on a supernova in progress.
Alkina: Cool! Wait, what is this?

Panel 3.
Epo: It was designed to rapidly and precisely determine the locations of gamma-ray bursts and observe their afterglows at X-ray, ultraviolet, and optical wavelengths.

Panel 4.
Alkina: Impressive! What was one of its major discoveries?

Panel 5.
Epo: Astronomer Alicia Soderberg and her team, using the Swift satellite, were the first to observe a star in the act of exploding.

Panel 6.
Alkina: Wow, it must have been very exciting to be the first ones to see such an event!

Swift – is a first-of-its-kind multi-wavelength satellite, launched in 2004, dedicated to the study of gamma-ray burst (GRB) science. Its three instruments work together to observe GRBs and afterglows in the gamma ray, X-ray, ultraviolet, and optical wavebands.

Gamma-ray burst (GRB) – a brief, but very energetic burst of the most powerful form of electromagnetic radiation.

Afterglow – In gamma-ray bursts, afterglows are the emissions seen after a GRB, which can be seen in X-rays, optical, and radio. Afterglows can last for days or even weeks.

Ultraviolet – electromagnetic radiation that is more energetic than visible light but less than x-rays. Ultraviolet, or UV, light is what causes suntan.

The discovery of gamma-ray bursts was accidental. In the 1960s, Vela satellites were launched to detect gamma rays from nuclear explosions here on Earth, which were a violation of the Nuclear Test Ban Treaty, signed in 1963. While no nuclear explosions were detected, these Vela satellites were the first to detect the completely unexpected cosmic gamma-ray bursts.

Swift Video Gallery – This gallery contains actual footage and some animations about Swift’s mission, including its launch. There are also press reports and scientist interviews about Swift.