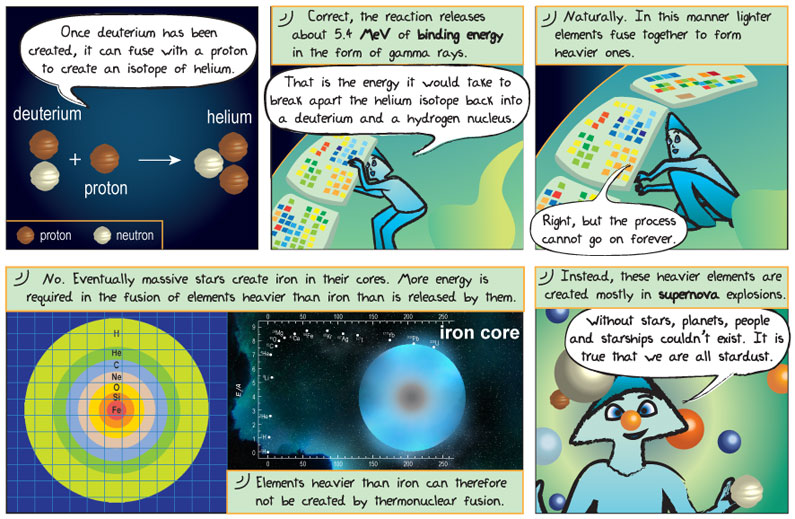 Panel 1.
Alkina: Once deuterium has been created, it can fuse with a proton to create an isotope of helium.

Panel 2.
Epo: Correct, the reaction releases about 5.4 MeV of binding energy in the form of a gamma ray.
Alkina: That is the energy it would take to break apart the helium isotope back into a deuterium and a hydrogen nucleus.

Panel 3.
Epo: Naturally. In this manner lighter elements fuse together to make heavier ones.
Alkina: Right, but the process cannot go on forever.

Panel 5.
Alkina: Without stars planets, people and starships couldn’t exist. It is true that we are all stardust.

MeV – Mega Electron Volts. The electron volt (eV) is a measurement of energy; One eV is the energy gained by an electron (or proton) dropping through an electrical potential of one volt. This is a tiny amount of energy, appropriate for describing the energies of atomic and subatomic processes. To give an example, the energy of visible light photons is about 1 eV, as is the typical energy of outer electrons in atoms. Adding the prefix “Mega” means we are talking about one million electron volts (MeV).

Binding energy – the energy it takes to break apart the nucleus of an atom into its constituent parts. Since energy is conserved, this amount of energy is also released when those parts fuse together to form a heavy nucleus. The graph below is called the curve of binding energy. It is a plot of the binding energy of all atomic nuclei (vertical axis) vs. their mass (horizontal axis). Notice that the curve rises steeply to a peak value, then drops slowly as mass increases. The peak of the curve is at Fe56 (Iron with mass 56). Stars produce energy by combining light elements, to the left of the iron peak, into heavier elements. This process is called nuclear fusion. The difference in binding energy between the initial and final nuclei is released as heat. Fusion beyond the iron peak does not release energy. Instead it requires that energy be input. That is why stars are not able to continue stable nuclear fusion of elements heavier than iron. Those elements are produced by different processes, typically accompanying supernova explosions.

Supernova (plural: supernovae) – The explosion of a star at the end of its lifetime, when it runs out of nuclear fuel in its core. Supernovae come in two types. One is called core collapse, and only massive stars can become core collapse supernovae. The other type of supernova is due to an exploding white dwarf. White dwarfs are low-mass stars, but if they acquire mass from a binary companion, they too can explode. Supernova explosions are so bright they can be easily observed in other galaxies.

Each element is determined by the number of protons in its nucleus. This must match the number of electrons the atoms has, and it is the number of electrons that determines the chemistry, which in turn is how we identify atoms. The neutrons that appear in elements heavier than hydrogen help to offset the repulsive electrical forces between the positive charges of protons, but they do not affect the basic chemistry of the atom. Thus, while an element may have different number of neutrons in its nucleus, it has to have a specific number of protons to have the properties of that element. Given these two bits of information, you can make your own “recipes” for creating different types of elements. For example, below is the recipe for making an isotope of helium.

The number on the top left of the chemical symbol signifies the total number of nucleons (protons and neutrons) in the nucleus of an atom. The number of the bottom left is known as the atomic number, which is also the number of protons in the nucleus. Here is another example in which nitrogen (N) and hydrogen (H) creates two different types of elements, carbon (C) and helium (He):

To create heavier elements requires higher temperatures and pressures than are present when a star is young. Therefore, heavier elements are created later in the evolution of the star, when its center is hotter. This goes on until the star can no longer sustain fusing the heavy elements at its core.

Periodic Table of Elements – An interactive periodic table for students.

The Periodic Table of Videos – A series of videos about all the elements in the periodic table.