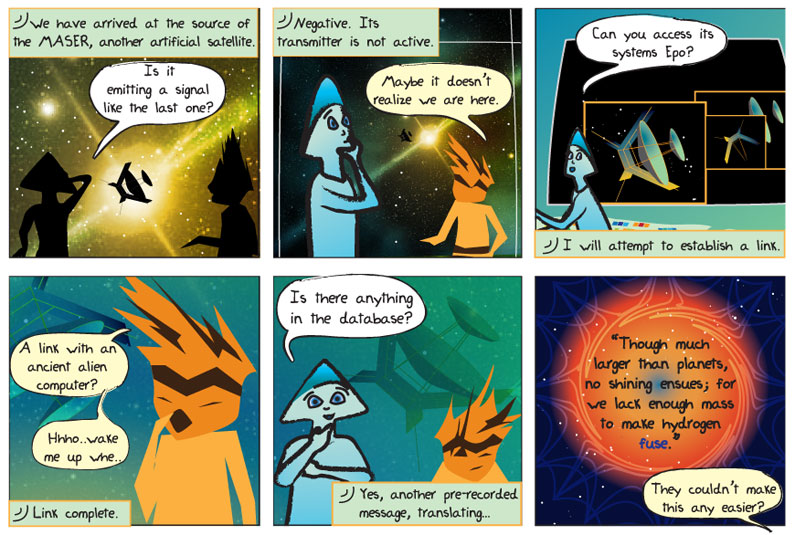 Panel 1
Epo: We have arrived at the source of the MASER, another artificial satellite.
Akina: Is it emitting a signal like the last one?

Panel 2
Epo: Negative. It’s transmitter is not active.
Beggrin: Maybe it doesn’t realize we are here.

Panel 4
Beggrin: A link with an ancient alien computer? Wake me up when…
Epo: Link complete.

Panel 5
Alkina: Is there anything in the database?
Epo: Yes. Another pre-recorded message, translating….

Translation: Though much larger than planets, no shining ensues; for we lack enough mass to make hydrogen fuse.
Beggrin: They couldn’t make this any easier?

Fuse – Fuse is a verb which means to merge two things into one. In the process called nuclear fusion, light atoms, for example hydrogen, are forced together to form slightly heavier atoms, like helium. Helium in turn can be fused into the heavier atom carbon, and so on. This process releases large amounts of energy and is what actually powers stars. However, fusion requires very high temperatures. That is why a tube of hydrogen or helium gas in a laboratory will not spontaneously undergo nuclear fusion.

There are many different kinds of astronomical objects, and most of them don’t fuse hydrogen into helium. But stars accomplish this feat quite easily, because stars have high enough internal temperatures to fuse atoms. Stars achieve their high internal temperatures as a result of their very large masses; the internal pressure needed to support the weight of all that mass requires that the temperatures of the gas inside the star be extremely high. For instance, the center of the Sun has a temperature over 10 million degrees Celsius. However, there is a very specific group of objects whose mass is very close to the mass of a star, but that lack the ability to fuse hydrogen into helium. Can you figure out just what they are?