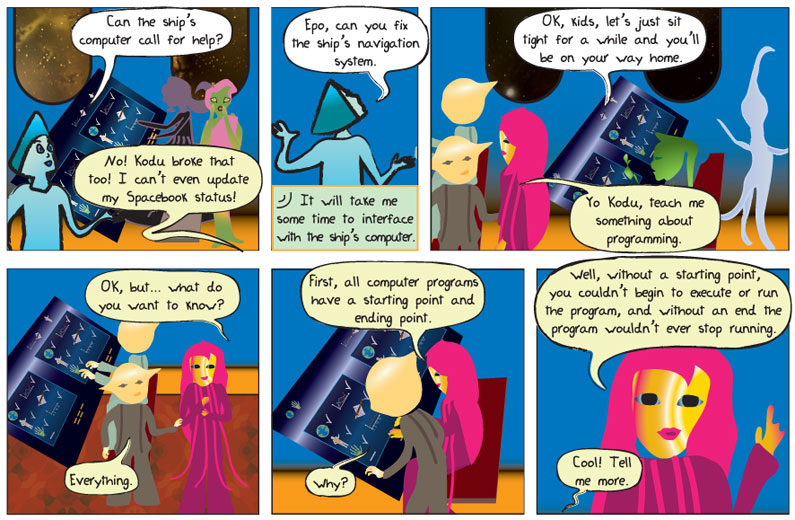 Panel 1.
Alkina: Can the ship’s computer call for help?
Laby: No! Kodu broke that too! I can’t even update my Spacebook status!

Panel 2.
Alkina: Epo, can you fix the ship’s navigation system.
Epo: It will take me some time to interface with the ship’s computer.

Panel 3.
Alkina: OK, kids, let’s just sit tight for a while and you’ll be on your way home.
Ludd: Yo Kodu, teach me something about programming.

Panel 4.
Kodu: OK, but… what do you want to know?
Ludd: Everything.

Panel 5.
Kodu: First, all computer programs have a starting point and ending point.
Ludd: Why?

Panel 6.
Kodu: Well, without a starting point, you couldn’t begin to execute or run the program, and without an end the program wouldn’t ever stop running.
Ludd: Cool! Tell me more.

Why do you suppose that all programs need to have a start and an end? Think about the devices that you use every day. Phone, computer, oven, etc. each has something that starts it and something that stops it when it is done performing the task you wanted it to do.

Without a start, you could not set initial parameters (like a phone number, program to open, or time) to tell the device how you wanted to use it. This is an important concept in programming. A programmer has to think about which parameters are relevant to use in his or her program and what the initial (or starting) values for those parameters ought to be.

Without an end, the program will run forever consuming resources like electricity and hardware power, which will keep other programs from running efficiently.