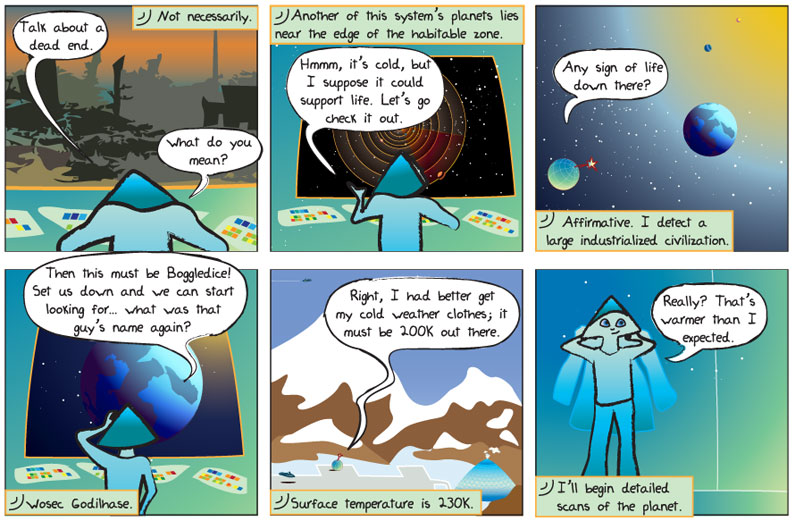 Alkina: Talk about a dead end.

Epo: Not necessarily.
Alkina: What do you mean?

Epo: Another of this system’s planets lies near the edge of the habitable zone.
Alkina: Hmmm, it’s cold, but I suppose it could support life. Let’s go check it out.

Alkina: Any sign of life down there?
Epo: Affirmative. I detect a large industrialized civilization.

Panel 4
Alkina: Then this must be Boggledice! Set us down and we can start looking for… what was that guy’s name again?
Epo: Wosec Godihase

Alkina: Right, I’d better get my cold weather clothes; it must be 200K out there.
Epo: Surface temperature is 230K.

In this episode, Alkina and Epo encounter a planet that lies on the very edge of the habitable zone, much as the planet Mars lies on the very edge of our own solar system’s habitable zone. Alkina expected that like Mars, the planet they encountered should have a surface temperature of around 200K (that’s about 73° Celsius below zero!). Instead Epo and Alkina find that the planet has a surface temperature of about 230K (about 43° Celsius below zero); which is still quite cold by Earth standards. Can you think of a process that could account for the unexpected increase in temperature?