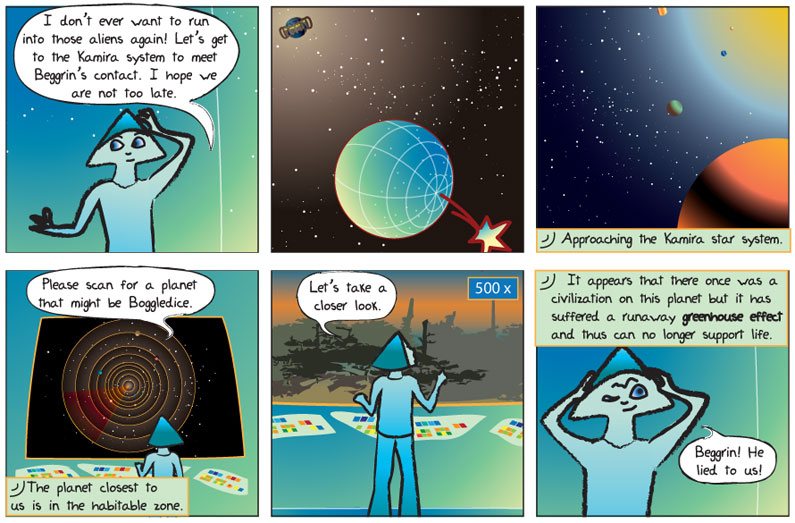 Panel 1
Alkina: I don’t ever want to run into those aliens again! Let’s get to the Kamira system to meet Beggrin’s contact. I hope we are not too late.

(They take off from worldship)

Alkina: Please scan for a planet that might be Boggledice.
Epo: The planet closest to us is in the habitable zone.

Epo: It appears that there once was a civilization on this planet but it has suffered a runaway greenhouse effect and thus can no longer support life.
Alkina: Beggrin! He lied to us!

Greenhouse effect – The process by which a planet’s atmosphere prevents radiant energy from its surface from escaping into space, thereby increasing the surface temperature of the planet.

For example, due to its surface temperature of around 6000°C or 10,800°F, the Sun shines mostly in visible light. Most of this light passes readily through our atmosphere to reach the surface because our atmosphere is transparent to visible light. When visible light gets absorbed by the Earth’s surface, the surface warms and re-emits the energy as infrared (IR) light. This happens because the surface of the Earth, being much cooler than the surface of the Sun, emits most of its energy at longer IR wavelengths. However, many gases in the Earth’s atmosphere are not transparent to IR light. Some molecules in the atmosphere, primary among them water vapor (H20), carbon dioxide (CO2) and methane (CH4), strongly absorb longer wavelength IR radiation. In this way the atmosphere acts as a blanket, keeping much of the IR light from leaving the Earth, and that causes the temperature of the planet to increase.

As the planet warms, it can have multiple feedbacks that either promote or counter further warming. For instance, seasonal ice caps at the poles and in high elevations will be reduced by warming temperatures, causing more of the incoming sunlight to be absorbed by the surface: snow is extremely reflective, so any reduction in snow cover tends to increase the amount of sunlight that gets absorbed, and this in turn increases warming. We call this kind of feedback a positive feedback. In addition, warmer temperatures cause surface water in the oceans to evaporate faster, putting more water vapor, the strongest absorber of IR, into the atmosphere and thus decreasing the ability of the IR to escape to space (another positive feedback). But increased evaporation can also mean that cloud cover increases, and clouds reflect sunlight back to space before it ever is absorbed by the ground. This would tend to cool the surface (a negative feedback). So some of these feedback processes can either increase or decrease warming, and exactly which effect will be most important can be difficult to determine. There are numerous additional feedbacks in planetary atmospheres, and some, like water vapor, have this dual positive/negative nature.

Venus, a planet very similar to the Earth, has undergone a runaway greenhouse effect early in its history. As a result, Venus lacks water (either in oceans or in its atmosphere) and its average surface temperature is 460°C (860°F). Life as we know it is impossible on Venus.

Greenhouse effect for teachers: From the National Oceanic and Atmospheric Administration:
https://www.esrl.noaa.gov/gmd/education/info_activities/pdfs/TBI_greenhouse_effect.pdf