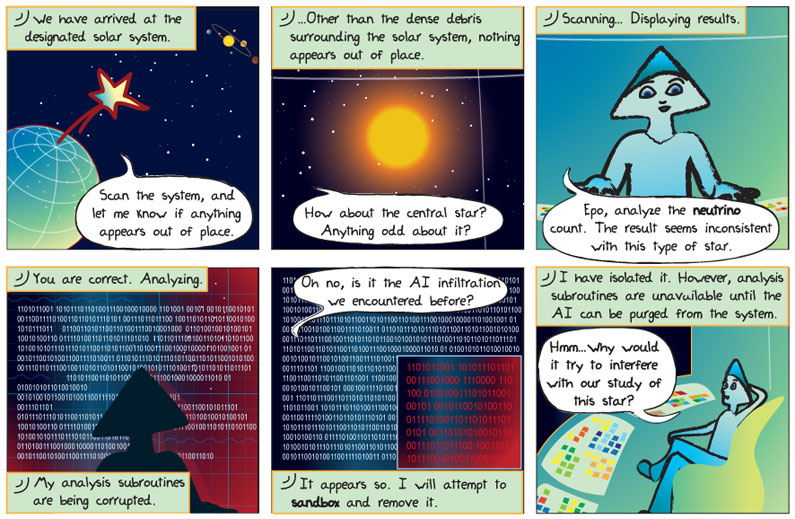 Panel 1.
Epo: We have arrived at the designated solar system.
Alkina: Scan the system, and let me know if anything appears out of place.

Panel 2.
Epo: Scanning… Other than the dense debris surrounding the solar system, nothing appears out of place.
Alkina: How about the central star? Anything odd about it?

Panel 4.
Epo: You are correct. Analyzing.
[Random characters appear across the screen.]
Epo: My analysis subroutines are being corrupted.

Panel 5.
Alkina: Oh no, is it the AI infiltration we encountered before.
Epo: It appears so. I will attempt to sandbox and remove it.

Panel 6.
Epo: I have isolated it. However, analysis subroutines are unavailable until the AI can be purged from the system.
Alkina: Hmmm… Why would it try to interfere with our study of this star?

Neutrino – A fundamental particle that has no charge, almost zero mass and that travels at nearly the speed of light. Neutrinos can pass through most matter without interacting with it.

Sandbox – In computer science, sandbox means to isolate a computer program such that it is unable to affect any other part of the computer, software or hardware.

Neutrinos are created in stars as lighter elements get fused into heavier ones. They were first predicted in 1930 by physicist Wolfgang Pauli, who was trying to explain why some nuclear reactions appeared to violate certain conservation laws of physics. He hypothesized that there was a neutral particle that was escaping detection and carrying away some of the energy and momentum in the nuclear reactions that scientists were studying.

It wasn’t until 26 years later in 1956 that neutrinos were finally observed by scientists. A few years after that it was discovered that there are three different types of neutrinos. The first neutrinos from the Sun were detected in 1968. The Sun produces a huge number of neutrinos every second. Just to give you an idea of how huge a number, consider this; every second about 100,000,000,000 neutrinos created in the Sun pass through every 6.5 square centimeters (about a square inch) of your body.

The neutrino and its friends – A short description of neutrinos along with brief historical notes.

Hunting Solar Neutrinos – An interview with astrophysicist John Bahcall, who helped determine the production rate of neutrinos from our Sun.