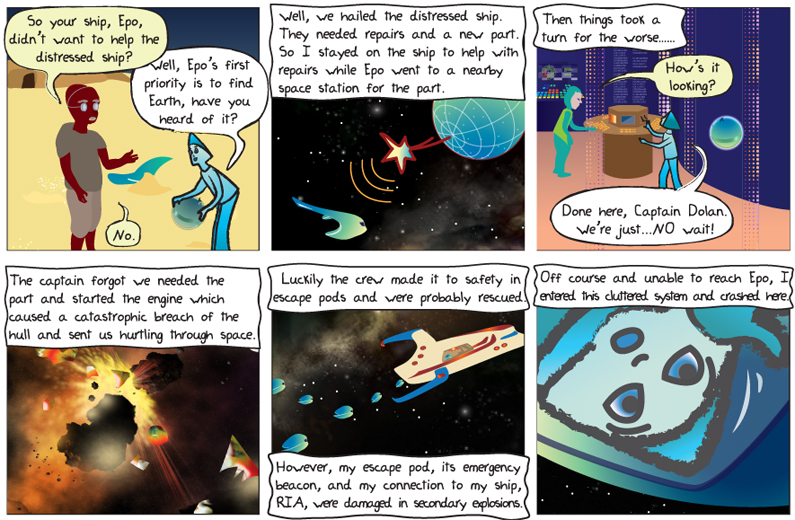 Panel 1
[At wreckage site on G’swigt’s planet]
G’SWIGT: So your ship, Epo, it didn’t want to help the distressed ship?
ALKINA: Well, Epo’s first priority is to find Earth, have you heard of it?
G’SWIGT: No.

Panel 2
[Flashback to Alkina waving, from Captain Dolan’s bridge, at the Epo as it leaves]
ALKINA-NARATION: Well, we hailed the distressed ship. They needed repairs and a new part. So I stayed on the ship to help with repairs while Epo went to a nearby space station for the part.

Panel 4
[There is an explosion]
ALKINA-NARATION: The captain forgot we needed the part and started the engine which caused a catastrophic breach of the hull and sent us hurtling through space.

Panel 5
[Escape pods fire away]
ALKINA-NARATION: Luckily the crew made it to safety in escape pods and were probably rescued. However, my escape pod, its emergency beacon, and my connection to my ship, RIA, were damaged in secondary explosions.

Panel 6
[Alkina and damaged RIA in the damaged pod, are strapped in]
ALKINA-NARATION: Off course and unable to reach Epo, I entered this cluttered system and crashed here.

According to Newton’s Laws; an object in motion tends to stay in motion unless acted upon by an outside force. The escape pods of Captain Dolan’s crew made it to safety but Alkina’s was caught too close to the secondary explosions. Not only did this damage her escape pod’s communications systems and emergency beacons but it also served as an outside force, throwing the ship off its original emergency course.