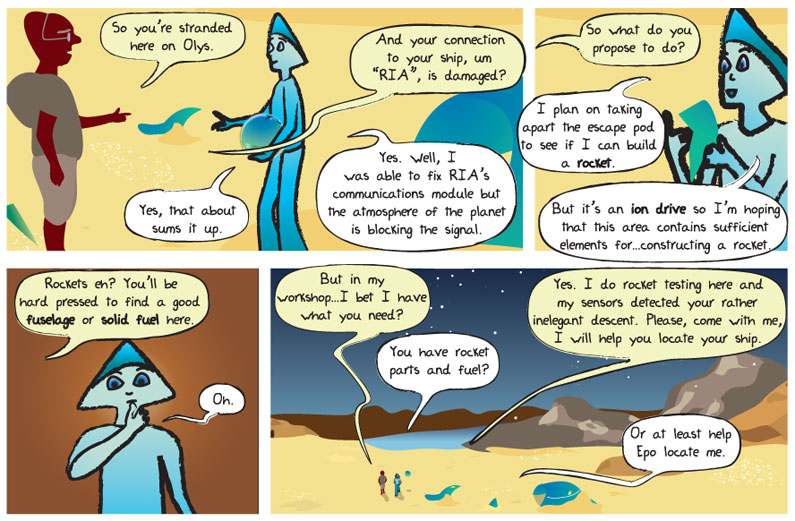 Panel 1
[Back on G’swigt’s planet]
G’SWIGT: So you’re stranded here on Olys.
ALKINA: Yes, that about sums it up.

Panel 2
G’SWIGT: And your connection to your ship, um “RIA”, is damaged?
ALKINA: Yes. Well, I was able to fix RIA’s communications module but the atmosphere of the planet is blocking the signal.

Panel 3
G’SWIGT: So what do you propose to do?
ALKINA: Well, I plan on taking apart the escape pod to see if I can build a rocket. But it’s an ion drive so I’m going to have to hope that this area contains sufficient elements for … constructing a rocket.

Panel 5
G’SWIGT: But in my workshop…I bet I have what you need?
ALKINA: You have rocket parts and fuel?

Panel 6
G’SWIGT: Yes. I do rocket testing here on this planet and my sensors detected your rather inelegant descent. Please, come with me, I will help you locate your ship
ALKINA: Or at least help Epo locate me.

rocket – a vehicle that uses its onboard fuel as a propellant.

ion drive – an engine that uses ions to produce thrust.

Fuselage – the whole of the main body of a rocket or aircraft.

solid fuel – solid, as opposed to liquid or gas, fuel for rockets that range from gunpowder to more chemically complex mixtures.

Why can’t Alkina use the ion drive to launch RIA into the atmosphere? It is a matter of acceleration. Ion drives accelerate very slowly and are unable to effectively escape a planet’s surface gravity. But if launched from space an ion drive’s final speed could far exceed that of a conventional solid fuel rocket.

Ion drives use magnetic fields to accelerate ions, positively charged particles, while rockets use chemical fuels. Currently ion drives are used in some space exploration satellites such as NASA’s Deep Space 1 (launched in 1998) and the European Space Agency’s GOCE (launched in 2009).