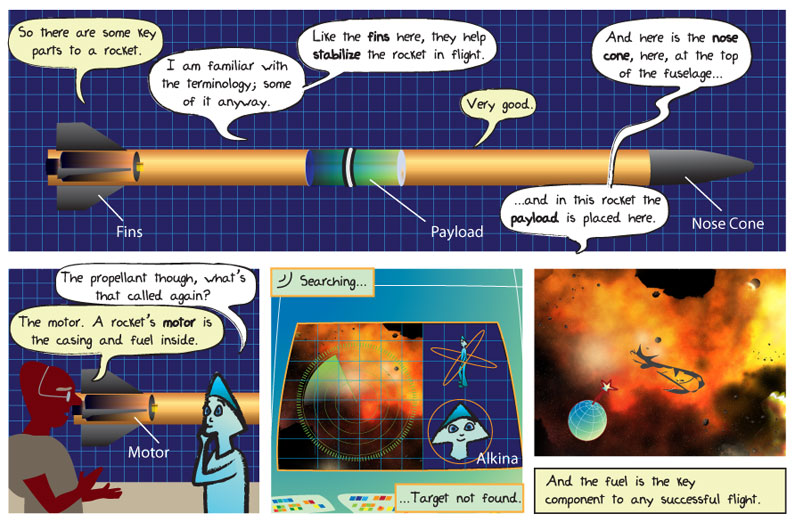 Panel 1
G’swigt: So there are some key parts to a rocket.
ALKINA: I am familiar with the terminology; some of it anyway.

Panel 2
ALKINA: Like the fins here, they help stabilize the rocket in flight.
G’swigt: Very good.

Panel 3
ALKINA: And the nose cone, here, at the top of the fuselage, and in this rocket the payload is placed here.

Panel 4
ALKINA: The propellant though, what’s that called again?
G’swigt: The motor. A rocket’s motor is the casing and fuel inside.

Panel 6
[Epo returns to Captain Dolan’s exploded ship]
G’swigt-NARATION: And the fuel is the key component to any successful flight.

fins – fins are wing-like projections. They help to stabilize the rocket’s direction of flight.

stabilize – to keep constant or steady.

nose cone – the forward top-most area of a rocket which sometimes houses avionics and/or payloads.

payload – the scientific or military devices that use the rocket to travel to the target.

motor – the chemical fuel and containment apparatus used to propel a rocket.

Doesn’t the payload belong in the nose cone? For many large, space-faring, rockets the payload is placed in the nose cone along with the avionics. For the Saturn V rocket, which was used for the Apollo mission to the Moon, the payload (including the astronauts) was the forward most part of the rocket including its nose cone.

For smaller rockets this is not the case. Because these rockets have smaller-mass payloads, designers have more freedom to choose where in the fuselage to place their experiments.