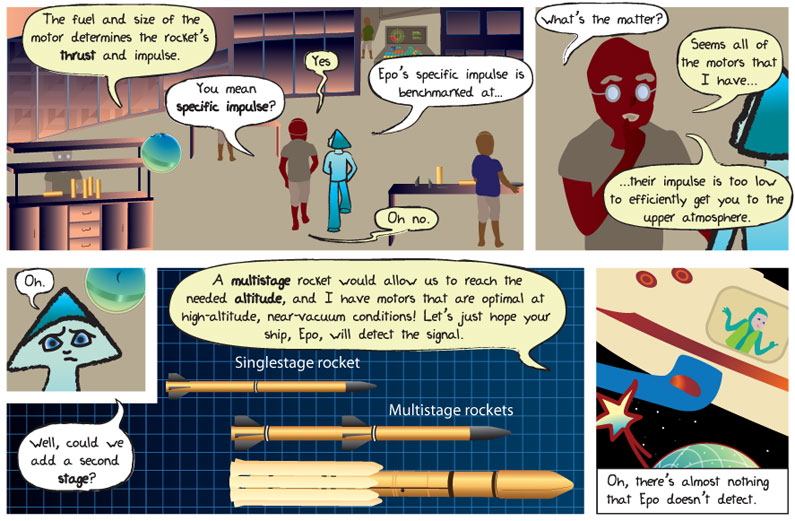 Panel 1
[Back at G’swigt’s workshop]
G’SWIGT: The fuel and size of the motor determines the rocket’s thrust and impulse.
ALKINA: You mean specific impulse?

Panel 3
ALKINA: What’s the matter?
G’SWIGT: Seems all of the motors that I have, their impulse is too low to efficiently get you to the upper atmosphere.

Panel 5
ALKINA: Well, could we add a second stage?
G’SWIGT: A multistage rocket would allow us to reach the needed altitude, and I have motors that are optimal at high-altitude, near-vacuum conditions! Let’s just hope your ship, Epo, will detect the signal.

thrust – a force caused by the expulsion of mass; the force is directed in the opposite direction that the mass is expelled. Applying thrust to an object causes it to accelerate. Like any force, thrust has units of newtons (N).

specific impulse – the efficiency of a motor determined by the force per mass over a given time. Specific impulse has units of newton seconds divided by kilograms (N s / kg).

stage – a section of a rocket that has its own engine(s) and propellant(s). Multi-stage rockets are designed to burn their stages in succession in order to place the rocket payload higher than could be done with only a single stage.

multistage rocket – a rocket with multiple stages. After one stage finishes burning it is jettisoned and the next stage begins.

altitude – height above either sea level or ground level.

While G’swigt builds his own rocket motors where he determines their thrust and impulse, how can you determine these attributes on model rockets that you can purchase at hobby stores?

The number after the letter is the motor’s thrust in Newtons. The general rule for model rockets is that the motor’s average thrust divided by 22.25 Newtons is the maximum weight limit in pounds for the rocket (including the fuselage, nose cone, etc.).

Multistage rockets are important and powerful tools as they allow a rocket to jettison mass (in the form of motor casing, fuselage, etc.) before ignition of the next stage. Each additional stage has less mass to propel against the force of gravity.

Alkina is concerned because if the G’swigt’s rockets do not have a high enough thrust then they won’t be able to launch RIA to an sufficient altitude above the planet’s atmosphere.